(ATTN: UPDATES throughout with Chung's remarks to reporters; CHANGES headline)

The prime minister made the remark during a visit to Tehran, where he met Iranian officials amid tension over the funds locked up in South Korea under United States sanctions. 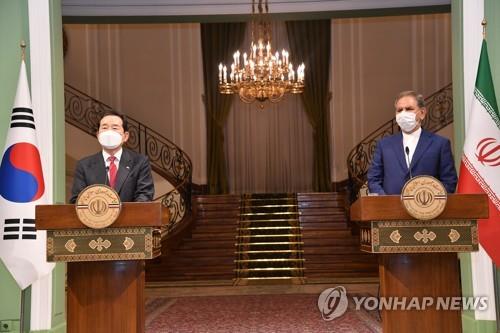 "I have said before that this money is Iran's money and should be returned to its owner," Chung told reporters traveling with him. "It's best to find a way and return it quickly."

He added that doing so is in South Korea's best interests and that efforts need to be made to overcome the "various constraints" that are preventing it from happening.

The prime minister recalled that in his meetings, Iranian officials expressed their disappointment over the impasse and called for a swift solution.

Chung is the first South Korean premier to visit the Middle Eastern country in 44 years.

In a joint press conference Sunday with Iran's First Vice President Eshaq Jahangiri, he said South Korea was willing to provide support "from the side" to restart talks on the 2015 Iran nuclear deal.

He elaborated to the traveling press corps that South Korea should contribute to the international community's decision on whether to restore the deal "by actively exchanging views with the United States, Germany" and other countries party to the agreement, and "by stating South Korea's position."

Also during the press conference, Chung had said South Korea "needs to step up cooperation with related nations, including Iran" to settle the issue of the frozen funds.

His remarks mirrored the South Korean government's commitment to settling the issue by lending support to Iran in its process to restore the nuclear deal with the United States, Britain, France and Germany.

The fund issue has been a major diplomatic thorn between Seoul and Tehran, and has been widely attributed as the reason behind Iran's seizure of a South Korean oil tanker and its crew members in early January. Tehran liberated the ship and its captain last week.

During their meeting Sunday, the Iranian vice president once again prodded Chung to unlock the frozen funds as soon as possible.

The two sides also agreed to expand humanitarian cooperation, possibly including medical exchanges, and to install a special consultative body that will be in charge of preparing for economic cooperation projects to be pursued after the potential restoration of the Iranian nuclear deal.

Chung also called for the prevention of Iran's detention of foreign ships in the future, saying, "The freedom of navigation should be guaranteed."

"This latest visit to Tehran is the expression of South Korea's commitment to building a forward-looking relationship between the countries," the prime minister also noted.

Efforts to hold a meeting with Iranian President Hassan Rouhani fell through "due to various reasons, including the COVID-19 situation in Iran," Chung said.

The prime minister is widely expected to step down in the coming weeks to run for president in the March 2022 election.

"This will likely be my first and last (overseas trip as prime minister)," he said, declining to elaborate on his future.

Chung is set to return to Seoul on Tuesday after wrapping up a three-day stay. 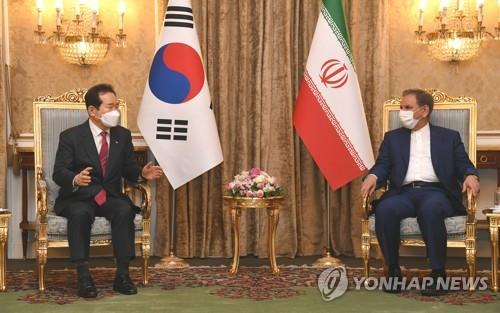