"Many neighborhood businesses, which are the backbone of Seoul's economy, have been collapsing. ...The fundamental solution is to allow them to run their businesses," Oh said during an online coronavirus briefing at the city government.

The city will work on "shifting the paradigm to 'mutually beneficial' virus restrictions, away from those that force small businesses to be the one who makes all the sacrifices," he said.

The move comes in response to growing complaints from small businesses, such as restaurants, gyms, bars and cafes, which have been reeling from strict business restrictions led by the central government.

Business owners have claimed they have been disproportionately hurt by what they called the government's inconsistent, confusing and unfair measures.

Last week, the mayor affiliated with the main opposition People Power Party, ordered the city's officials to review the blanket bans on businesses after 9 p.m. or 10 p.m. to better meet the needs of each industry.

The capital city, home to nearly 10 million of the country's total 52 million population, has been also working on social distancing rules of its own, with an aim to finish a draft by this weekend and to consult with the central government sometime next week, he said. 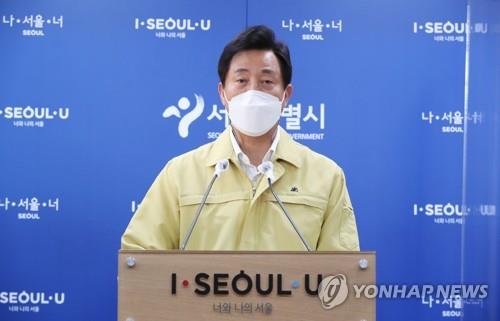 In apparent efforts to dispel worries about potential policy inconsistency and confusion, he said the city will remain in close consultation with the central government even for running a pilot program.

The goal is for the city to eventually "replace the current restriction system with one that is readily applicable, effective and more targeted to individual businesses," he said.

He warned, however, business owners will be required to shoulder heavier responsibility and penalties for failing to comply with the new system when it is enforced.

As part of an important pillar of the plan, the mayor called on the central government to approve rapid self-testing kits.

"We will actively review running a pilot program at karaoke businesses to see if the kits are effective in preventing the spread of COVID-19," he said.