SEOUL, April 12 (Yonhap) -- South Korea's health authorities on Monday said there is no causal relation between COVID-19 vaccines and 11 reported deaths after vaccinations, assuring the public of the safety of the vaccines.

An investigation was concluded on 11 out of 47 people who died within days of receiving COVID-19 vaccines by AstraZeneca and Pfizer Inc, the Korea Disease Control and Prevention Agency (KDCA) said. 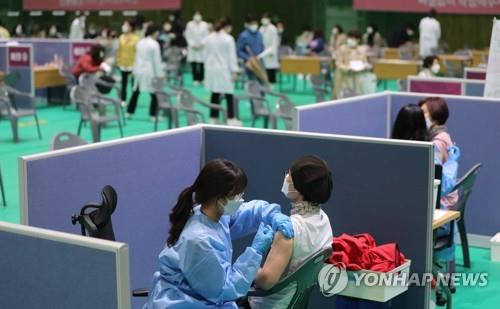 An epidemiological survey on 32 out of 47 reported cases has been concluded so far, the KDCA said.

The KDCA said all of the 11 people were over 70 years old with pre-existing diseases, and seven of them had been admitted to long-term care facilities.

The authorities concluded that their deaths were highly likely to be connected to their pre-existing conditions, including stroke and dementia.

The authorities also said they will continue to conduct epidemiological surveys on 15 other reported deaths, adding that the safety of the vaccine has been extensively studied in clinical trials.

Health authorities also resumed administering AstraZeneca vaccines to eligible recipients aged over 30 earlier in the day, days after temporarily putting the program on hold amid growing concerns over its safety.

Health authorities have also said the government will provide adequate compensation for serious side or adverse effects from the scheduled shots. The government will cover costs for hospital stays and other kinds of treatment costs

S. Korea reaffirms no link between COVID-19 vaccinations and deaths

S. Korea reaffirms no link between COVID-19 vaccinations and deaths