"(We, three-term lawmakers,) have committed ourselves to bone-cutting soul-searching and reforms over the public's stern sentiment (toward the DP) shown in the by-elections," Rep. Youn Kwan-suk told reporters on behalf of the party's three-term lawmakers.

"(We) share the criticisms raised during the previous meetings of the first- and second-term lawmakers and, as the three-terms, the backbone of the party, we feel a greater sense of responsibility."

The remarks followed a meeting of the party's three-term lawmakers held at the National Assembly earlier in the day.

The meeting brought together 18 of the total 25 three-term lawmakers inside the ruling party as it is trying to pick up the pieces following its devastating defeats in the by-elections for the Seoul and Busan mayors and other regional seats last Wednesday. 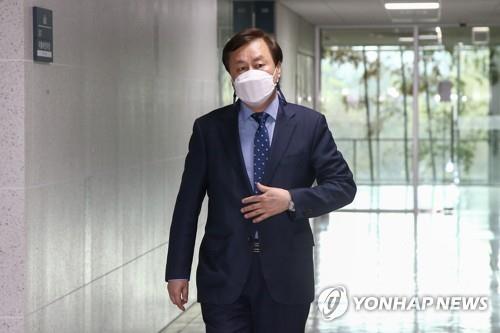 Earlier, the party's groups of first- and second-term lawmakers held separate meetings in the aftermath of the election rout that came about a year prior to the presidential election.

They largely laid the blame for the election disaster on the party's railroading of a hard-line prosecution reform and unsuccessful real estate policies that failed to rein in skyrocketing housing prices.

The novice lawmakers, in particular, went so far as to lay the blame on the party leadership's decision to field candidates in the two mayoral elections even though the former Seoul and Busan mayors left the seats in the face of sexual harassment allegations.

According to other party sources, the three-term lawmakers attributed the election defeats mainly to the unsuccessful real estate policies and jointly voiced a need to overhaul them during the meeting earlier in the day.

"We also shared the understanding that the party needs to assume a more active role (in the decision-making process) involving Cheong Wa Dae, the government and the party," Youn also noted.

To take responsibility for the election defeats, the DP's leadership -- acting party chief Rep. Kim Tae-nyeon and the seven-member supreme council -- resigned last week. The party will pick a new floor leader Friday and a new chairman in a congress on May 2. 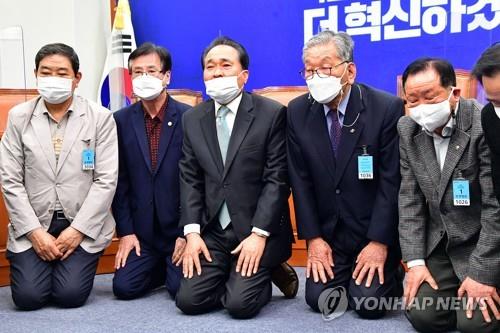