SEOUL, April 13 (Yonhap) -- Lt. Gen. Kim Tae-sung took office as the new commandant of South Korea's Marine Corps on Tuesday and vowed to strengthen its capabilities and readiness posture to be a key strategic maneuver unit.

Kim will lead the service for a two-year term, replacing Lt. Gen. Lee Seung-do, who had been in the position since April 2019.

"Our security situation has been changing rapidly for the denuclearization of the Korean Peninsula and the establishment of a permanent peace," Kim said in his inauguration speech. "I am well aware of what the people want from the Marine Corps."

Kim vowed strenuous efforts to make "the mighty Marine Corps, which is capable of being swiftly deployed to scenes under any circumstances and ending incidents right away to best support the peace and prosperity of the nation and the people."

To achieve the goal, the commandant pledged to proactively conduct education and training with a focus on actual combat missions and to boost its air-ground operations capabilities by maximizing cutting-edge technologies.

After his graduation from the Republic of Korea Naval Academy in 1988, the 54-year-old officer has served in various positions in the service branch, and he is known for his expertise in Marine operations and strategy fields. 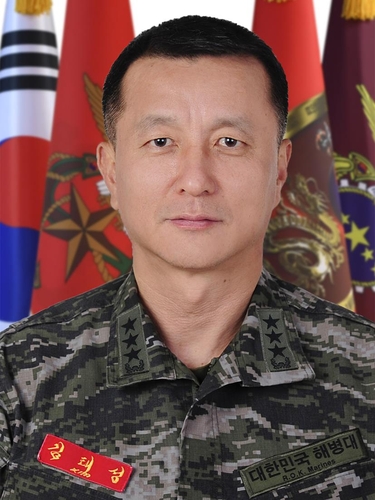