SEOUL, April 13 (Yonhap) -- North Korea could have up to 242 nuclear weapons and dozens of intercontinental ballistic missiles (ICBMs) by 2027, a research report said Tuesday, calling for South Korea and the United States to weigh "all options" to counter the evolving threats.

The Asan Institute for Policy Studies and the Rand Corp. made the estimate in a joint report, stressing "serious" considerations should be given to deploying tactical nuclear arms in the South and other measures to deter the North's possible attempt at nuclear warfare.

The report came amid signs of worrisome activity at the North's east coast shipyard seen as a site for submarine launched ballistic missile tests and after a U.N. panel report that Pyongyang continues to develop its nuclear and missile programs.

"It is estimated that the total number of North Korea's nuclear weapons by 2027 would be between 151 and 242, in addition to tens of mobile intercontinental ballistic missiles," the report, titled "Countering the Risks of North Korean Nuclear Weapons," said.

The report based its estimate on the amount of fissile material, such as plutonium and highly enriched uranium, which Pyongyang is believed to have produced. It cited such data as the U.S. intelligence community's estimate and other known analysis.

The report, however, noted the need for caution in drawing conclusions on the North's inventory, citing "vast uncertainties," such as the fact that its estimate is not based on the actual production of nuclear arms, and the uncertain number of operational centrifuges used to produce highly enriched uranium.

The report warned that with further advances in its nuclear capability, the North will be able to employ the nuclear threats and attacks in "much more coercive and diverse ways," such as preemptive nuclear strikes.

To fend off the North's nuclear warfare attempts, the report called for Seoul and Washington to consider options such as dedicating U.S. strategic nuclear weapons to targeting the North and deploying U.S. intermediate ballistic missiles with nuclear weapons in or near South Korea and stationing tactical nuclear weapons here.

The report also stressed the need for the allies to consider "putting all options" on the table to maximize the effectiveness of their efforts against the North's nuclear weapons use.

"The United States could also threaten North Korea that if it crosses an ICBM or nuclear weapon inventory threshold, or both, the United States will station in the ROK eight to ten tactical nuclear weapons capable of destroying deep underground facilities," it added. ROK is South Korea's official name, the Republic of Korea.

In addition, the report said that the transfer of wartime operational control (OPCON) from Washington to Seoul should be delayed until the provision of nuclear weapons support to the South by the U.S. becomes certain.

"Unlike in a conventional conflict, in a nuclear conflict, the ROK is not ready to take the principal role in confronting North Korea, especially in the initial stage of a contingency," the report said.

"This is a key weakness that could lead the North Koreans to interpret the OPCON transition as a sign of faltering U.S. commitment to the defense of the ROK," it added. 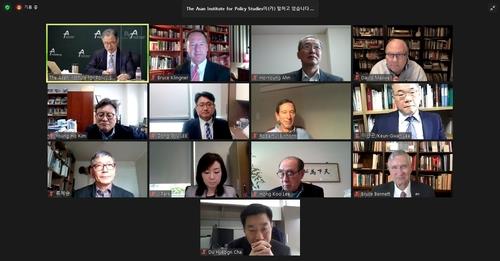