He was attending the first Cabinet meeting since his inauguration last week, in which he had discussions with Cabinet members on the sensitive issues, according to Cheong Wa Dae.

Speaking at the session, chaired by President Moon Jae-in via video links, Oh raised the need to make a fresh attempt and change the way of thinking in efforts to curb the spread of COVID-19, as the self-employed and other small merchants have long suffered difficulties.

He reiterated his call for the Ministry of Food and Drug Safety to approve the public use of simplified "self-testing" kits.

He first made the call on Monday for a plan to give the owners of restaurants, bars and other entertainment facilities more leeway to extend business operating hours. 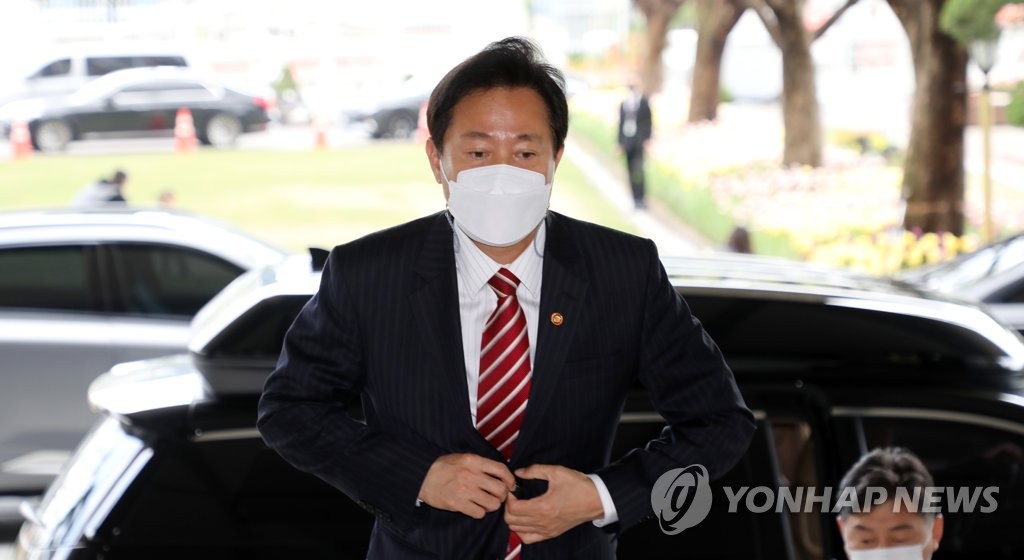 The mayor affiliated with the main opposition People Power Party also called for the revision of legislation and the land ministry's rules on levying taxes on real estate ownership.

The left-leaning Moon administration has been pushing for sharp increases in the so-called published prices of housing, which serve as a basis for setting property holding taxes and health insurance fees for some citizens.

The prices, assessed and posted by the authorities, are usually 70-90 percent lower than market prices.

Oh said that local governments need to have their say in the process of deciding the published prices, Cheong Wa Dae spokesman Kang Min-seok said.

In response, Finance Minister Hong Nam-ki said that the published prices are decided annually through a far-reaching survey by the Korea Real Estate Board under a relevant law and then reviewed by outside experts.

Hong added that those who disagree with the government-posted prices are already allowed to lodge formal complaints before the prices are fixed.

On the mayor's proposal on the coronavirus response, Health Minister Kwon Deok-cheol took issue with the accuracy of such self-testing kits.

While the kits produce speedy results, the problem is whether they are accurate, the minister pointed out.

He expressed concern about the possibility of wrong test results, which would lead to a serious impact on social distancing steps.

"It should be used as a supplementary means," he told the mayor.