SEOUL, April 13 (Yonhap) -- South Korean parents of young students are reacting nervously to the recent openings of sex doll experience shops or cafes in their neighborhoods around the country.

But parents of young students, in particular, seem to be losing their patience with the spread of what they call hazardous facilities. 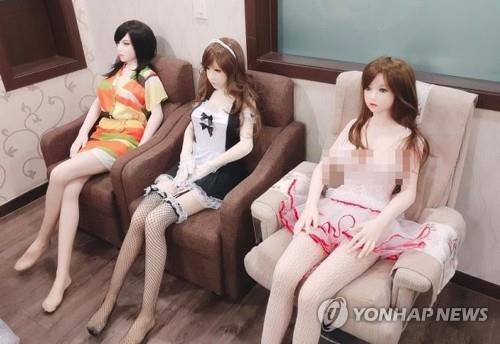 In Yongin, about 50 kilometers south of Seoul, a businessman opened a sex doll experience cafe last Saturday in a district dotted with elementary and middle schools but was forced to call it quits only three days later in the face of stubborn protests from parents and residents.

Soon after the opening of the experience cafe, a citizen started an online petition on the website of Yongin City Hall, asking authorities to nullify the cafe's business permit due to its harmful effects on neighborhood youth.

"Three elementary schools, two middle schools, one high school and 11 child education facilities are located within a 500-meter radius of the sex doll experience cafe that operates on the second floor of a shopping mall on a main street of Yongin," the petitioner said, calling for the cancellation of its business permit.

A large number of Yongin residents also vented their anger and dismay at the sex doll cafe in various online communities.

As the petition gathered signatures from 36,618 people as of 11 a.m. Tuesday, the businessman, whose identity was withheld, made public his decision to close the cafe, saying his shop is not an illegal facility but that he finds it difficult to do business in the face of strong opposition from residents.

The man said he spent about 40 million won (US$35,500) to open the cafe after confirming that his shop is a legitimate business entity just like adult toy shops.

Indeed, the municipality said there was no way to sanction the sex doll experience cafe as it belongs to a type of free business that can be started simply by reporting to the tax office.