The morning low plummeted below zero in many parts of the country, with the Mount Seorak area in Gangwon Province logging a low of minus 7.8 C, according to the Korea Meteorological Administration (KMA). 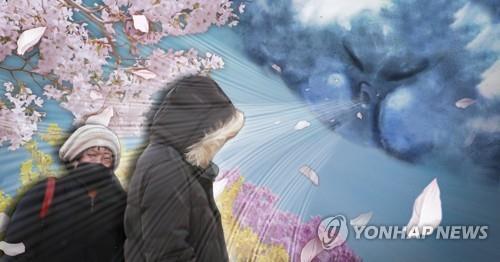 As of 7 a.m., the mercury dropped to minus 4.9 C in Cheorwon, 90 kilometers northeast of Seoul; minus 3 C in Yeoncheon, northern Gyeonggi Province; minus 2.3 C in Paju, just north of the capital; minus 1.8 C in Gyeryong, just west of Daejeon; and minus 1.4 C in Bonghwa of North Gyeongsang, the agency said, noting the apparent temperatures were far lower due to strong winds.

Many people on their way to work retrieved their thick winter coats to shield themselves against the sudden cold snap.

Construction site workers and traditional market merchants were seen making bonfires to warm themselves, while farmers were busy taking measures to protect their crops from being damaged by cold weather.

The KMA said the unseasonable cold snap in the morning was caused by cold wind blowing from the northwest, but the daytime temperatures will rise to around 15 C, displaying a large daily temperature difference.

Temperatures will again fall to around zero on Thursday morning before rising to 20 C in the daytime, the agency said.

The weather is expected to return back to normal Friday, when the lowest daily temperatures will range from 3 C to 12 C and the highest from 14 C to 20 C, it said.