SEOUL, April 14 (Yonhap) -- A North Korean propaganda outlet on Wednesday denounced South Korea's recent decision to deploy new attack helicopters and destroyers as part of preparations for a long-sought invasion of the North.

Last month, South Korea announced that it will import around 36 large combat choppers by 2028 and build next-generation Aegis-equipped destroyers as part of efforts to beef up its national defense capability.

"The South Korean military is focused recklessly on strengthening its armed forces now," Meari, a North Korean propaganda website, said. "It aims to accelerate its long-sought preparations for a northward invasion."

The website criticized South Korea for being hypocritical in talking about "peace" in front but seeking to hurt its compatriots in the North whenever possible.

The website also denounced Seoul's weapon purchase plan as an "inhumane" act that will cost an astronomical amount of money at a time when more attention should be placed on the "abject" reality caused by the global coronavirus pandemic. 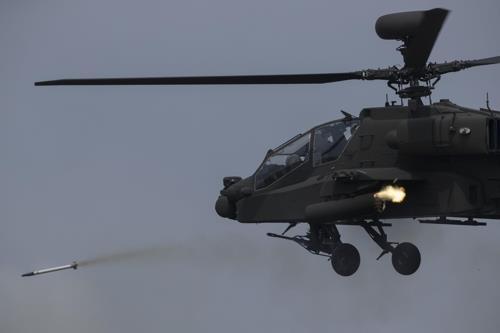