POSCO said its board of directors approved the plan last week to build a plant in the southern industrial city of Gwangyang by 2023.

The plant, on which construction is set to begin in the first half of the year, will have an annual production capacity of 43,000 tons of lithium hydroxide, which is enough to manufacture about 1 million electric vehicles.

POSCO said it plans to import spodumene from Australia, from which lithium hydroxide will be extracted at the plant. 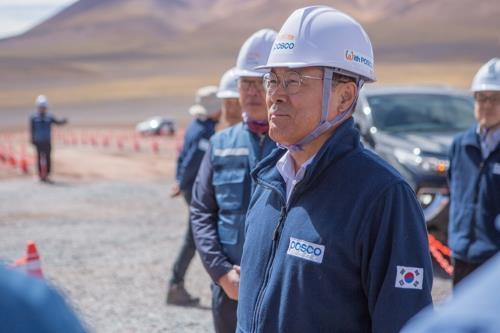 Separately, POSCO is set to begin building a plant in the coming months near the Salar del Hombre Muerto salt lake in northern Argentina. The plant will have an annual production capacity of 25,000 tons of lithium.

The site is confirmed to contain 13.5 million tons of lithium reserves, which is enough to make batteries for about 370 million electric cars, according to POSCO.

Initially, POSCO estimated that the site has 2.2 million tons of lithium reserves.

POSCO Chemical said the plant in Gwangyang will boost its annual production capacity of cathodes to 100,000 tons by 2023, which is enough to manufacture about 1.1 million electric vehicles equipped with 60 kilowatt-hour battery packs.