Moon plans to visit Washington, D.C. "in the latter half of May" at Biden's invitation, according to Cheong Wa Dae spokesman Kang Min-seok. The two sides are still in consultations on an exact schedule, which will be made public once fixed, he added. 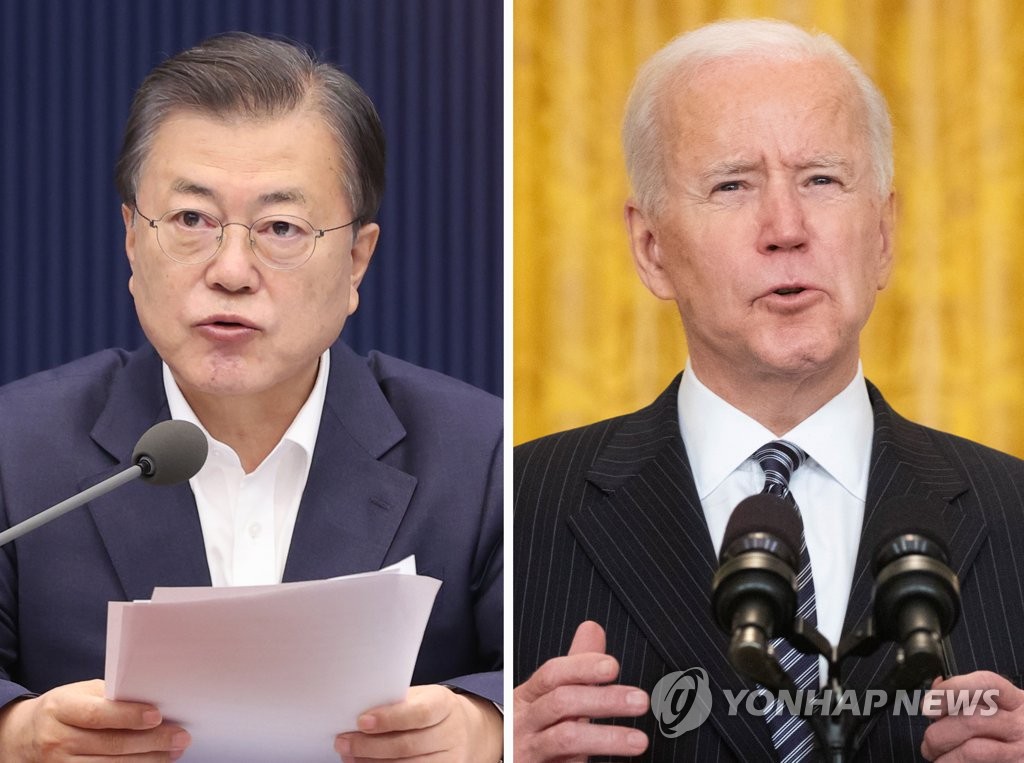 The upcoming summit is expected to offer a chance for the leaders to discuss ways for the continued development of the Seoul-Washington alliance and progress in the drive for the complete denuclearization of Korea and establishment of permanent peace, Kang stated.

It also represents the importance of the alliance and the "friendship" between the two countries' peoples, he said.

The Biden administration is expected to complete a review of Washington's strategy on North Korea and announce its outcome around when Moon travels to the U.S. in May, a senior Cheong Wa Dae official told reporters later.

He said that consultations are under way between Seoul and Washington on Moon's itinerary, specific agenda items and protocol-related matters.

It would mark Moon's fourth visit to the U.S. since his inauguration in May 2017 for bilateral talks with his American counterpart.

Moon had a phone call on Nov. 12 last year with then President-elect Biden, followed by phone talks with him two weeks after he took office in late January.

"The two sides have shared the view that it's more important than any other thing for their leaders to hold in-person talks with each other at an early date and discuss a vision for the development of the South Korea-U.S. alliance and a realistic North Korea policy," the Cheong Wa Dae official said on the customary condition of anonymity.

The White House made a separate announcement on Biden's plan for the summit with Moon.

"President Biden looks forward to welcoming President Moon of the Republic of Korea to the White House in the second half of May," Psaki said in a daily press briefing, referring to South Korea by its official name.

The spokesperson said the summit will highlight the "iron-clad" U.S.-South Korea alliance, as it follows a recent visit by Secretary of State Antony Blinken and Defense Secretary Lloyd Austin to Seoul.

"We are still finalizing the date for that, but this visit, following the recent two-plus-two visit to Seoul by secretaries Blinken and Austin, and the national security advisers' trilateral meeting in Annapolis, will highlight the iron-clad U.S.-South Korea alliance and the longstanding ties and friendships between the people of our two countries," she said.

National Security Adviser Jake Sullivan hosted his South Korea and Japanese counterparts in Maryland earlier this month for three-way discussions on a wide range of issues, including how best to approach North Korea.

The Moon-Biden summit will follow the U.S.-Japan summit, set to be held here Friday.

Psaki noted the denuclearization of North Korea will be an important topic for both of the summit meetings.

"I will say that, of course, our approach to China, and our shared coordination and cooperation on that front will be part of the discussion, as will our joint commitment to the denuclearization of North Korea," she said.

She added an "important part of our objective is to take our approach and approach the denuclearization of the Korean Peninsula in close coordination with our partners and allies in the region and certainly South Korea and Japan are two of our important partners in the region."

"I would say that it's just an indication that ... I mean I wouldn't overthink this to be honest, but because we sometimes say one, we sometimes say the other. But we understand the intentions of the North Korean leadership are ones that we have concerns about, and that certainly is a factor," she said.

When asked earlier to confirm, the U.S. Department of Defense said the terms represent a "distinction without a difference."