President Moon Jae-in picked him in a Cabinet reshuffle intended apparently for new momentum in his leadership that was further dampened by the ruling Democratic Party's rout in the April 7 Seoul and Busan mayoral by-elections. 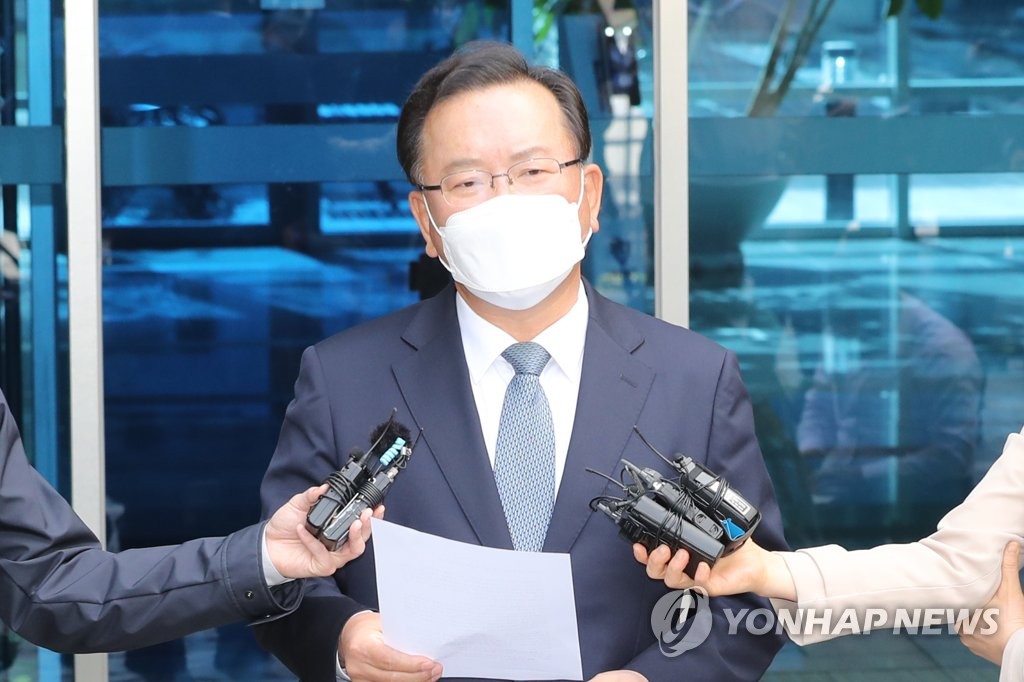 Kim is a politician who has long dedicated himself to anti-regionalism, social reform and national unity, presidential chief of staff You Young-min said, while making public his nomination.

He is a "qualified figure" to deal with desperate public demands, shown in last week's by-elections, for overcoming COVID-19, eradicating property-related malpractices and stabilizing the livelihoods of the people, Yoo said.

Yoo cited Kim's affluent experiences and expertise on political and administrative affairs, plus a balanced sense of political affairs and ability to communicate with the public.

After being nominated, Kim told reporters that he will devote his strength to help the nation overcome the coronavirus pandemic and restore the people's livelihoods after his appointment following a parliamentary confirmation hearing.

Kim in particular pledged to "place greater effort towards cooperative governance, inclusion and national unity." He added, "I won't hesitate to ask for cooperation from the opposition party."

The president also nominated new land, labor, industry, science and oceans ministers with a marked focus on choosing bureaucrats or specialists rather than politicians.

Noh Hyeong-ouk, minister for government policy coordination at the prime minister's office, was tapped to lead the ministry of land, infrastructure and transport.

Having long served at the finance ministry, Noh has worked at the office, tasked with coordinating key policy measures, over the past four years under the Moon administration.

Moon Sung-wook, deputy head of the Office for Government Policy Coordination, was named as minister of trade, industry and energy.

The president nominated An Kyung-duk, a standing member of the Economic, Social & Labor Council, as minister of employment and labor, and Lim Hye-sook, chief of National Research Council of Science & Technology, as science minister, while deciding to promote Park Jun-young, vice minister of oceans and fisheries, to the ministerial position.

Finance Minister Hong Nam-ki was not included in the roster of ministers to be replaced. He is expected to serve as acting prime minister until Kim assumes the post.

If appointed after the National Assembly's confirmation hearing, Kim will replace Chung Sye-kyun. Chung offered to resign following a 15-month stint. He is widely expected to join the 2022 presidential race.

In a statement delivered by You, the president said it is regrettable that Chung leaves the Cabinet but believes it is right to let him go so that he can "go his own way."

"I believe he will serve for the country and the people wherever he is," Moon was quoted as adding.

Kim served as interior minister from 2017-2019 and ran for a parliamentary seat in Daegu, 302 kilometers southeast of Seoul, as a ruling party candidate.

He was defeated by Joo Ho-young of the main opposition People Power Party (PPP), who is now its floor leader.

Daegu is a traditional stronghold of the conservative PPP. Kim was born in 1958 in the nearby town of Sangju, North Gyeongsang Province.

Political observers view the president's choice of Kim as a political message for national unity. Both Chung and Lee Nak-yon, the first prime minister of the Moon administration, hail from the southwestern province of Jeolla, a longtime power base of the Democratic Party. Many agree that regionalism is still prevalent in South Korea's politics.

Kim also vied with Moon for the party's leadership in 2016.

In a quite unusual case, meanwhile, Moon's office made back-to-back announcements of the Cabinet shake-up and changes in the lineup of his major Cheong Wa Dae aides.

Lee is succeeding Choi Jae-sung, who had been in the job for less than a year.

Lee said, "I think my role is to help the president make good decisions through enough reviews of various options, which include ideas different from his."

Ki Mo-ran, professor of preventive medicine at the National Cancer Center, was appointed to be in charge of disease control and prevention affairs, a newly created post.

The simultaneous reshuffle of the Cabinet and Cheong Wa Dae team came as Moon struggles to win back public support in his final year of his presidency.

Moon's approval rating dropped to another record low of 30 percent in Gallup Korea's latest poll on 1,005 adults nationwide from Tuesday through Thursday.

It marked a 2 percentage-point fall from the previous week, with the president's disapproval rating having risen 4 percentage points to 62 percent. The margin of error is plus or minus 3 percentage points with a confidence level of 95 percent.