In a press meeting here, Kerry also said that it is not appropriate for the United States to step into the process, amid Seoul's calls for Washington's cooperation in ensuring Tokyo share related information in a transparent, swift manner.

"The U.S. is confident that the government of Japan has had full consultation with IAEA, that IAEA has set up a very rigorous process," Kerry said. "What is key is Japan's continued coordination with IAEA as it monitors the process." 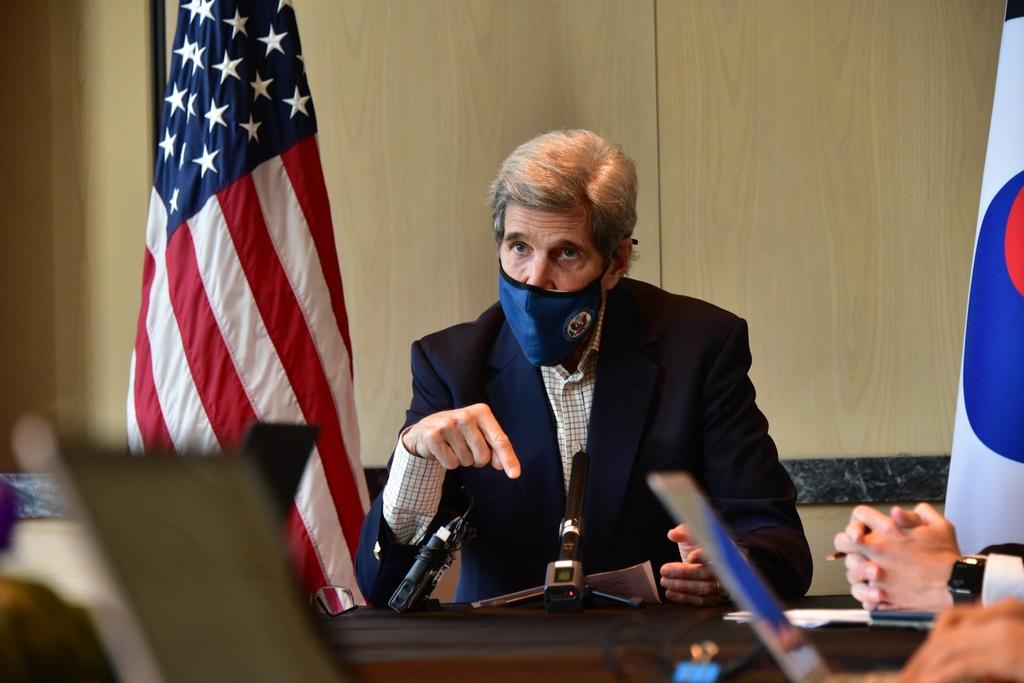 The U.S. envoy stressed Washington's confidence that "Japan has worked very closely with IAEA, and will continue to."

Asked if the U.S. is willing to play a role related to the issue, Kerry said that Washington is not planning anything right now. A day earlier, Seoul's Foreign Minister Chung Eui-yong called for Washington's cooperation on the issue.

"We don't think it is appropriate for the U.S. to jump in to the process that's already under way and where there are very clear rules and expectations," he said.

"Will we be concerned to make sure that the procedure is followed? Sure. We take interest in that, but not anything in a formal way in process," he added.

Last week, Japan finalized the decision to start discharging the tritium-laced water into the sea in 2023 in what is expected to be a decadeslong process despite opposition from South Korea and other neighbors. All storage tanks at the Fukushima plant are expected to be full as early as the fall of 2022.

Kerry arrived in Seoul on Saturday following his four-day visit to Shanghai, where he discussed cooperation with his Chinese counterpart, Xie Zhenhua, on the climate issue ahead of the virtual Leaders Summit on Climate to be hosted by U.S. President Joe Biden on Thursday and Friday.

On the possibility of Chinese President Xi Jinping attending the climate summit, Kerry said that it's up to China to make the decision.

"China has to make its own announcement about the decision of who participates and how. President Xi is invited, and we very much hope that he will take part," he said.

Touching on China's commitment to the fight against climate change, Kerry said "none of us has the ability to force anyone."

"We are seeking cooperation, according to highest standards of diplomacy, and multilateral obligations, and global agreements," he said, noting that Beijing has started to call climate change a "crisis."

"The language is strong, and it talks about cooperation. It says that we have to address with seriousness and urgency," he added.