South Korea's gross domestic product came to 468.8 trillion won (US$419 billion) in the fourth quarter of 2019, about a month before the new coronavirus hit Asia's fourth-largest economy.

As the economy shrank 1 percent on-year in 2020 in the wake of the COVID-19 pandemic, however, the country's GDP dwindled to 463.4 trillion won in the October-December period last year.

Optimism about South Korea's economic growth for the January-March period comes on the back of rising overseas shipments and corporate capital spending.

Presiding over a meeting of economic ministers, which was also attended by several business leaders, President Moon Jae-in said South Korea's first-quarter GDP has already bounced back to the pre-pandemic level or is estimated to have done so on a faster-than-expected recovery in exports and investment. 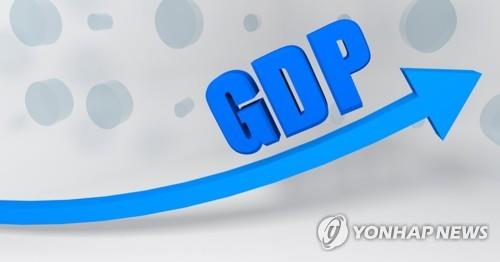 According to a central bank estimate, a 1.3 percent gain in first-quarter GDP means the country's economic growth has rebounded to the level before the coronavirus outbreak.

The Bank of Korea (BOK) is scheduled to release its advance estimate of South Korea's first-quarter economic growth on April 27.

South Korea's exports hit a record high in the first quarter as shipments of chips and autos remained robust amid the pandemic, according to the Korea Customs Service.

Overseas shipments stood at $146.5 billion in the first quarter, up 12.5 percent from a year earlier and the largest-ever quarterly amount.

In the first 10 days of April, South Korea's exports rose 24.8 percent on-year to $15 billion on resilient shipments of chips and autos amid the pandemic.

At a news conference after a monthly rate-setting meeting Thursday, BOK Gov. Lee Ju-yeol said South Korea's growth rate for this year will likely be above the bank's previous prediction and reach the mid-3-percent range.

In late April, the central bank projected the local economy to expand 3 percent on-year in 2021, with its consumer prices increasing 1.3 percent.

With the BOK slated to unveil its revised growth forecast in May, a BOK official said there is a high likelihood of the central bank upgrading its outlook to reflect brisk exports and investment, America's increased stimulus and the effect of South Korea's extra budget.
(END)