SEOUL, April 19 (Yonhap) -- Sales of equity-linked securities (ELS) in South Korea plunged more than 30 percent in the first quarter of the year amid the coronavirus pandemic, data showed Monday.

The value of ELS issues came to 18.8 trillion won (US$16.8 billion) in the January-March period, down 31.9 percent from three months earlier, according to the data from the Korea Securities Depository (KSD).

The figure was also down 10.3 percent from the 20.9 billion won floated during the same period a year earlier.

ELS refers to hybrid debt securities whose returns are linked to the performance of underlying equities, including a stock index.

Sales of ELS tracking the S&P 500 and other foreign stock indexes all increased, while those of ELS based on South Korea's benchmark KOSPI tumbled 19 percent from the previous quarter.

ELS products worth 24.5 trillion won were redeemed in the three-month period, down 35.3 percent from three months earlier but up 23.4 percent from a year earlier.

The outstanding value of ELS products stood at 55.8 trillion won as of end-March, up 9.1 percent from the prior quarter and about 23 percent from a year earlier. 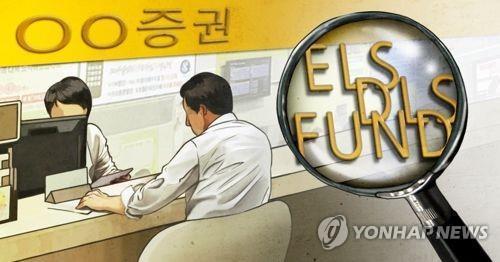