Chung Eui-yong made the remarks during a parliamentary interpellation session in response to a query by Rep. Moon Jin-seog of the Democratic Party.

"If (Japan) follows the due processes under the standards of IAEA, (Seoul) has no particular reason to object," the foreign minister said.

"Rather than opposing the plan (outright), Seoul is relentlessly and consistently requesting Japan (accept) those three things, while putting our top priority on (safeguarding) the health and safety of our people," the foreign minister noted.

Tokyo announced Tuesday that it plans to start releasing over 1.2 million tons of Fukushima's contaminated water into the Pacific Ocean in two years, triggering a backlash from Seoul, Beijing and other neighbors.

The U.S., on the other hand, responded that the Japanese plan appeared to be in line with global standards. U.S. Special Presidential Envoy for Climate John Kerry also said Washington is "confident" about Japan's consultation with IAEA over the plan, whiling visiting Seoul on Sunday.

Chung stressed that the U.S., though it expressed support for the plan, basically shares the same position with Seoul.

"The U.S. government stands with us as well on the basic principle that 'the Japanese government's nuclear power plant water release (plan) should get suitability verification from IAEA,'" according to Chung.

He said, however, that Seoul elaborated its position on the issue to the U.S. side and sought the country's understanding "through various channels" after the U.S. reaction to the Japanese water release plan showed "many different elements" from that of South Korea.

"(Seoul) is comprehensively studying various countermeasures (to take) in case Japan does not faithfully implement the obligations under the U.N. Convention on the Law of the Sea or customary international law," he added. 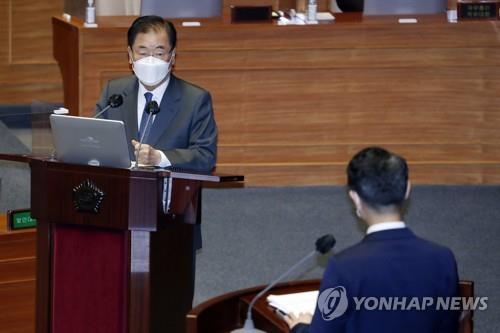