Concern has been escalating over the possibility of rising interest rates and consumer prices across the globe, which could make world financial markets more volatile.

"The global financial market, which has long been accustomed to low prices and rates, could suffer from a tantrum if worries over hikes in inflation and interest rates loom large," First Vice Finance Minister Lee Eog-weon said in a policy meeting.

There has been a persistent risk of financial market volatility expanding down the road due to an imbalance in the recovery of advanced economies and emerging markets, he said.

"There is a need to watch more closely the potential impact of international destabilizing factors on the domestic financial market and the local economy," Lee said. 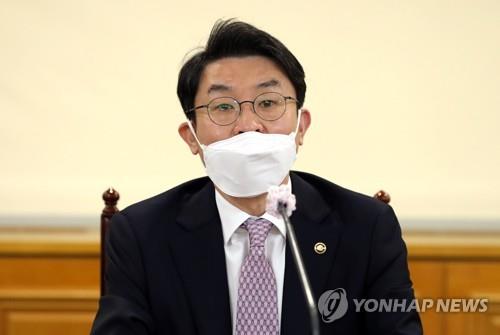 "In particular, the government will closely analyze the impact of possible rises in global interest rates on local household and corporate debt and come up with countermeasures."

South Korea's household debt has been growing in recent years. Outstanding bank loans to local households came to 1,009.5 trillion won (US$910 billion) as of end-March, up 6.5 trillion won from the previous month, according to central bank data.

South Korea's large companies have seen their ability to service debts worsen sharply over the past year due to plunging profits resulting form the coronavirus pandemic.

The vice finance minister also said the government will ramp up efforts to further boost the economy's recovery without being complacent about improved economic indicators.

There has been rising optimism that South Korea's first-quarter economic growth is widely estimated to have recovered to pre-pandemic levels on a rapid rebound in exports and investment.

South Korea's exports hit a record high of $146.5 billion in the January-March period, up 12.5 percent from a year earlier, as shipments of chips and autos remained robust amid the pandemic.

It represents a sharp turnaround from last year's dismal performance. Asia's fourth-largest economy shrank 1 percent on-year in 2020 in the wake of the COVID-19 pandemic.
(END)