Foreign Minister Chung Eui-yong revealed the bilateral consultation under way between Seoul and Washington, during a parliamentary session.

"Currently, (South Korea) is discussing (the potential swap deal) with the U.S. side quite earnestly," the foreign minister said, responding to a query by Rep. Park Jin of the main opposition People Power Party.

"Vaccine cooperation between South Korea and the U.S. is taking place in a multilayered manner through various levels," he added.

The foreign minister also noted that such bilateral collaboration concerning vaccine procurement should be considered a priority in the two countries' alliance relationship regardless of whether Seoul would or would not join the Quad, the U.S.-led four-way regional dialogue.

"The tension between the U.S. and China or (Seoul's) participation in the Quad, I believe, has nothing to do with (vaccine cooperation) directly," Chung said, responding to Park's related question.

The foreign minister also added that the country is internally reviewing an option to dispatch a special envoy to procure COVID-19 vaccines.

The government is currently in the hot seat for what critics said was a slow rollout of the national vaccination campaign.

Earlier, the Seoul government said it has secured enough vaccines to innoculate 79 million people, more than its 52 million population.

A series of mishaps in securing COVID-19 vaccines as scheduled, however, spawned concerns that the nationwide inoculation scheme may be delayed, which in turn may put its goal to create herd immunity by November in jeopardy. 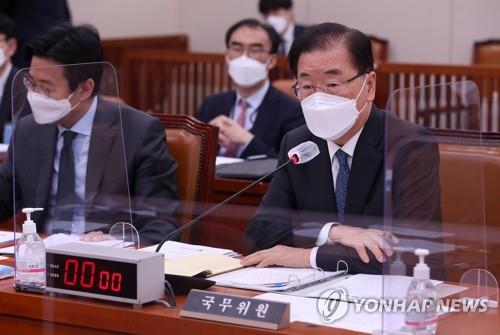