SEOUL, April 20 (Yonhap) -- South Korea on Tuesday completed the ratification process for three key International Labor Organization (ILO) conventions, which have long stalled due to objections from businesses and conservatives.

The Ministry of Employment and Labor presented the instruments of ratification of the conventions on workers' rights and forced labor to the U.N. agency via video links. They will come into effect on April 20, 2022, one year after the event.

"We will continue to work together with labor and management to ensure basic workers' rights are sufficiently guaranteed and healthy labor-management relations based on autonomy and responsibility are developed," Minister Lee Jae-gap said during the event.

ILO Director-General Guy Ryder welcomed the ratification as an important step forward in the development of the nation's labor relations.

South Korea, which joined the ILO in 1991, had not adopted four of the organization's eight core conventions, lagging behind international standards in protecting labor rights. 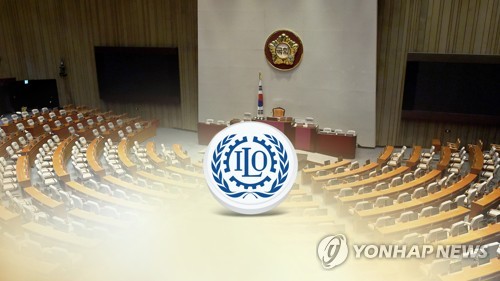 The nation also revised labor laws in line with the conventions, including an amendment last December to allow unemployed people and fired workers to join labor unions.

However, the government did not push for the endorsement of Convention No. 105 on the abolition of forced labor because the convention, which bans forced labor as a punishment for political views, contradicts the national security law.

Among 187 ILO member countries, 146 have adopted all eight key conventions. Among 36 members of the Organization for Economic Cooperation and Development, 32 have ratified them all. Japan and the United States have adopted only six and two conventions, respectively.

The ratification was one of President Moon Jae-in's campaign pledges during the 2017 election.

The Moon administration first sent the ratification bills to the National Assembly in 2019, but they were scrapped amid objections from the conservative opposition party and businesses that worried the passage would further enhance labor unions' power.

Companies are calling for measures to cope with the impact the conventions will have on their business while labor groups are demanding the endorsement of the remaining convention and further revisions of labor laws that they say are in disagreement with the ILO conventions.
(END)