SEOUL, April 21 (Yonhap) -- South Korea's exports of kimchi touched an all-time high in the first quarter of the year thanks to its popularity amid the coronavirus pandemic, data showed Wednesday.

Overseas shipments of kimchi came to US$46.57 million in the January-March period, up 54.3 from a year earlier, according to the data from the Korea Customs Service and industry sources.

It represents the largest-ever quarterly figure and breaks the previous yearly record of $42.08 million registered in the second quarter of last year.

Imports of kimchi stood at $38.51 million in the first quarter, up 7.4 percent from a year earlier, resulting in a surplus of $8.06 million in the country's kimchi trade. 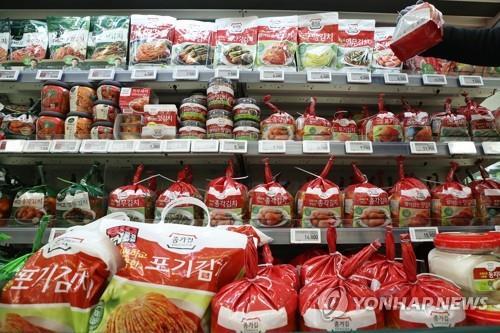 The surplus is the largest since the black ink of $9.35 million recorded in the fourth quarter of 2009.

By volume, South Korea's kimchi exports came to 11,181 tons in the three-month period, about one-sixth of 67,940 tons in imports.

Industry watchers attributed the first-quarter rise in kimchi exports to the popularity of the fermented food that is considered to boost the body's immunity level amid the COVID-19 outbreak.

In the first quarter, kimchi exports to Japan spiked nearly 68 percent on-year to $24.72 million, with those of the United States soaring 80.6 percent to $8.46 million. Shipments to Hong Kong jumped 50.3 percent to $2.34 million, according to the data.
(END)