SEOUL, April 21 (Yonhap) -- Less than 1 percent of the Navy's total yearly budget will be spent on the operation and maintenance of a light aircraft carrier that South Korea envisions to build, military officials said Wednesday, refuting claims that the new asset is far from cost-effective.

South Korea is working to secure a 30,000 ton-class light aircraft carrier by 2033 with its own technologies in a move to boost the country's defense capabilities.

Following the government's approval in February to push for the project, a feasibility study is under way. Around 2 trillion won (US$1.8 billion) is expected to be spent on building the ship, according to the arms procurement agency.

But critics and some lawmakers have raised questions about the cost-effectiveness and the usefulness of the project, claiming that the costly vessel does not quite fit the country's operational circumstances.

"Some 2 trillion won is likely to be spent over the 10 years to come, and most of the money will be invested in the local industry," a Navy official told reporters.

"The maintenance and operating cost is expected to come to around 50 billion won per year, which amounts to a mere 0.6 percent of our total budget for 2021," he added.

An additional 3 trillion won will be required to introduce around 20 vertical takeoff and landing (VTOL) jets for the aircraft carrier, but those jets will be run by the Air Force as its major assets, according to the official.

He also dismissed the speculation that the Navy will seek to secure at least three units, rather than one, of the light aircraft carrier, noting that it will use the new ship along with two amphibious assault ships -- LPH-6111 Dokdo and LPH-6112 Marado -- which are already in operation.

The envisioned aircraft carrier is expected to be equipped with a conventional engine, not a nuclear-powered one, though the country would consider a hybrid electric propulsion system, another official said.

"The aircraft carrier will be a game changer on the Korean Peninsula in the future. It will not only serve as a useful tool to deter aggressions by North Korea but will be capable of striking the North's major targets in contingencies so as to help us achieve victory in a shorter period of time with minimum damage," the official said.

The Navy also stresses that the new item will play a key role in dealing with potential, transnational and non-military threats so as to boost the national interests and security.

Currently, eight countries in the world -- the United States, China, Russia, Britain, France, Italy, India and Thailand -- have aircraft carriers. Japan is expected to deploy two units in the mid 2020s, according to government data. 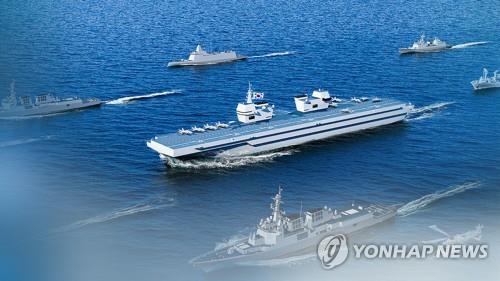 Less than 1 pct of Navy budget to be spent on operating light aircraft carrier: officials

Less than 1 pct of Navy budget to be spent on operating light aircraft carrier: officials