SEOUL, April 21 (Yonhap) -- South Korean President Moon Jae-in stressed the importance of the United States restarting dialogue with North Korea at an early date, speaking during an interview with The New York Times.

"The most important starting point for both governments is to have the will for dialogue and to sit down face to face at an early date," he was quoted as saying in a story posted on the newspaper's website Wednesday.

Especially for South Korea, he emphasized, denuclearization is a "matter of survival."

Moon is scheduled to visit Washington, D.C. next month for his first in-person summit talks with President Joe Biden.

"He beat around the bush and failed to pull it through" when it comes to efforts on North Korea, Moon said.

He expressed hope that Biden will be different.

"I hope that Biden will go down as a historic president that has achieved substantive and irreversible progress for the complete denuclearization and peace settlement on the Korean Peninsula," he added. 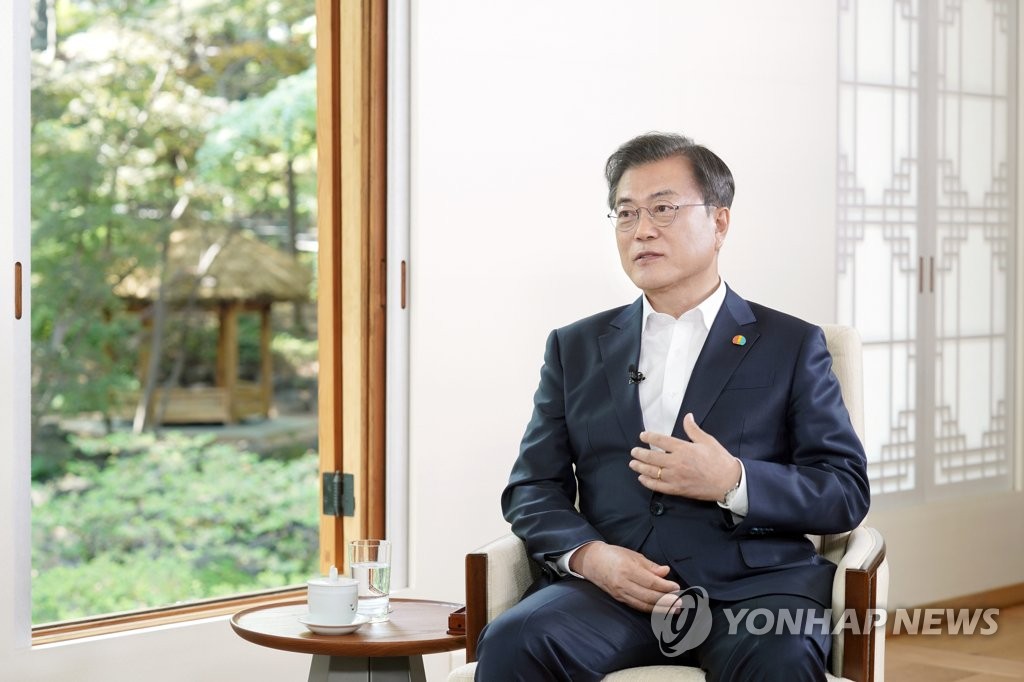 Moon suggested that the U.S. take "gradual and phased" steps toward the denuclearization of North Korea with "simultaneous" exchange of concessions and incentives with the North.

He described such a phased approach as the most realistic, even if it is imperfect.

What is important for Washington and Pyongyang is to work out a "mutually trusted road map," he said.

He asked the two sides to learn from the failed summit in Hanoi in 2019 and to work together for "more realistic ideas."

If so, he said, "I am confident that they can find a solution."

Moon also called on the U.S. to cooperate with China on North Korea and other global issues.

"If tensions between the United States and China intensify, North Korea can take advantage of it and capitalize on it," he said.

Regarding a new agreement between South Korea and the U.S. on defense cost sharing, Moon recalled that the Donald Trump administration's call had lacked "reasonable and rational calculation."

He said he had decided to suspend negotiations as Trump's excessive demands violated the foundation of the two countries' relationship.

The deal, reached within 46 days of the launch of the new U.S. administration, was a "clear testament to the importance President Biden attaches to" the alliance, Moon said.

Moon had the interview at Cheong Wa Dae last Friday, according to his office.