SEOUL, April 22 (Yonhap) -- An embattled senior prosecutor accused of abuse of power requested the prosecution on Thursday to convene two panel meetings to review the legitimacy of an ongoing investigation against him.

In a statement released by Lee's lawyer, Lee strongly denied the allegations against him. He also expressed concerns about "biased" media reports and "possibly targeted" investigation against him.

Unless the lingering questions are fully answered, the investigation will face serious problems in terms of "fairness and objectivity," read the statement.

"Through the eyes of legal experts and outside panels, it will become clear that neither prosecutor Lee nor his team exerted undue influence" on the case, it said.

Both panel meetings are only advisory and not legally binding.

In March 2019, Kim was stopped at Incheon International Airport, west of Seoul, from leaving the country as prosecutors sought to reinvestigate allegations that he received sexual favors from a local constructor more than a decade ago.

Lee, head of the Supreme Prosecutors Office's anti-corruption team at that time, allegedly meddled in and pressed the investigators to drop the case.

On Saturday, Lee was questioned at the Suwon office for nine hours. He had repeatedly refused to comply with subpoenas.

Earlier this month, prosecutors charged two key suspects of the case -- Cha Gyu-geun, commissioner of the Korea Immigration Service, and Lee Kyu-won, the prosecutor who requested the exit ban -- with abuse of power, obstruction of justice, document falsification and others. 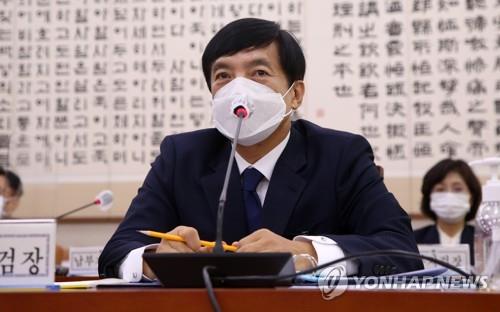