SEOUL, April 23 (Yonhap) -- South Korea's financial authorities are moving to impose an income tax on cryptocurrency trading from next year, but investors in digital tokens have raised a nagging question about the proposed taxation.

Like many governments around the world, South Korea has been struggling with how to regulate cryptocurrency trading as daily cryptocurrency turnover recently surpassed 20 trillion won (US$17.9 billion).

So far, the government has defined a cryptocurrency as a "crypto asset with no intrinsic value," and few rules have been set on regulating cryptocurrencies.

"A cryptocurrency is a crypto asset with no intrinsic value and a highly speculative (investment)," Eun told lawmakers.

Eun said the government could not protect cryptocurrency investors because digital tokens are speculative markets with little regulatory oversight. 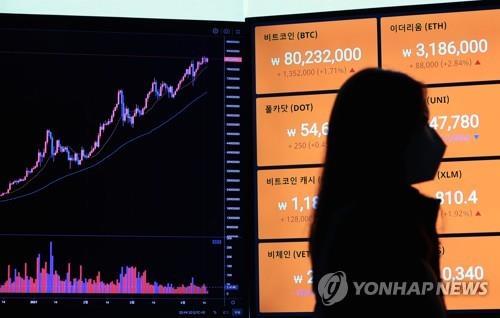 Bank of Korea Gov. Lee Ju-yeol has also denied cryptocurrency's utility as a means of exchange or payment, citing its high volatility.

Describing a recent surge in the price of Bitcoin as "abnormal," Lee said it is difficult to understand why the record rally had continued.

Bitcoin topped 80 million won (US$72,000) per unit in South Korea for the first time in mid-April. The virtual currency is currently trading at some 60 million won, according to local cryptocurrency exchange Bithumb.

Some investors say Bitcoin could be an alternative as a hedge to gold, but critics say the cryptocurrency frenzy is a bubble created by excess liquidity amid the COVID-19 pandemic.

Although financial regulators have not come up with rules to protect cryptocurrency investors from fraud, the government will impose a 20 percent tax on income from cryptocurrency transactions from 2022.

According to the finance ministry, the proposed taxation is aimed at "normalizing taxation on trading income of crypto assets."

Major economies around the world, including the United States, Japan, Britain and Germany, have imposed taxes on cryptocurrency investments, the ministry said. 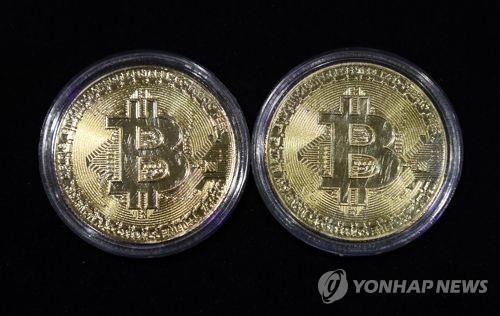 Lee Jong-koo, a former senior FSC official and a senior official at the Korea Blockchain Association, urged the government to make a new law on regulating crypto assets.

"There is no unified and consistent law on crypto assets while there are millions of cryptocurrency investors, and daily turnover reaches tens of trillions of won," Lee said.

While the government is hesitant about creating a set of rules to regulate cryptocurrencies, it does not appear to turn a blind eye to the recent frenzied buying of digital tokens.

Until June, the government will crack down on any illegality involving cryptocurrencies, such as money laundering.