SEOUL, April 23 (Yonhap) -- Thirty-three Navy sailors who serve on the same naval ship have tested positive for the new coronavirus, the defense ministry said Friday, in the first such mass infection on a military vessel.

According to the ministry, one Navy officer who serves on the Gojunbong landing ship underwent a virus test and tested positive, after learning that a teacher of his child's day care center contracted the coronavirus.

The child, however, tested negative, and how the officer got infected is currently under investigation.

Of the total 84 crew members of the ship, an additional 32 were confirmed to have been infected, with 51 others testing negative, it added.

In a separate case, a total of 113 sailors aboard the Navy frigate Jeonbuk returned to a port and underwent virus tests, as family members of two service members were found to have contracted the virus.

"All of them tested negative today. To prevent the further spread, we are enforcing aggressive mitigation strategies according to the military and health authorities' guidelines so as to protect the health of our members," a Navy official said. 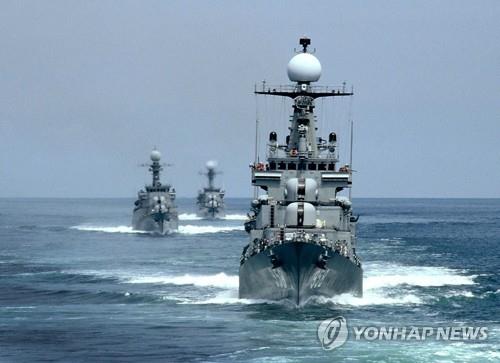 In the wake of the mass infection, Navy Chiefs of Staff Adm. Boo Suk-jong convened an emergency meeting earlier in the day and ordered all crew members of the country's Navy vessels to undergo virus tests as a prevention step.

The Navy also heightened the social distancing level among its service members by one notch to Level 2.5, which bans them from taking vacation and off-installation trips.

Currently, the defense ministry enforces the Level 2 scheme for all units across the country, which allows vacations under strict antivirus measures.

"Given their unique service conditions, all sailors are supposed to be in isolation on their ships until the test results come out," the official said.

He also called for thorough preparations for the second phase of the vaccine inoculation campaign, which is expected to take place early next month.

In March, the ministry began administering COVID-19 vaccines, and military doctors and other health care workers in the military were the first recipient group.

On Friday, the defense ministry also reported five more COVID-19 cases at the barracks, bringing the total number of patients among military members to 750. Of the total, 678 have been fully cured and 72 are under treatment.