"Semiconductors are (tantamount to) the rice of the economy in the 21st century and the heart of South Korea's economy," DP floor leader Rep. Yun Ho-jung said during the inaugural meeting of the special committee on semiconductor technology.

"It's not too much to say the future of South Korea depends on the (global) semiconductor war," he said.

The committee's launch came amid growing global competition for the supply of semiconductors, the backbone of South Korea's exports.

Rep. Yang Hyang-ja, a former semiconductor executive at Samsung Electronics who was named the chair of the new party committee, said her committee will come up with a law proposal to help support the local semiconductor industry, no later than August.

"(The committee) will lay out a series of super dramatic support measures that will exceed those by rival countries," Yang noted.

"The latest semiconductor war is a global one, which is expected to be difficult and take a long time (to win)," she added.

The committee also plans to propose a set of assistance and deregulation measures for local semiconductor makers to President Moon Jae-in, according to Yang.

The committee has some 25 DP lawmakers as its members and former executives at Samsung and SK hynix, the No. 2 chipmaker in South Korea, have joined as advisers. 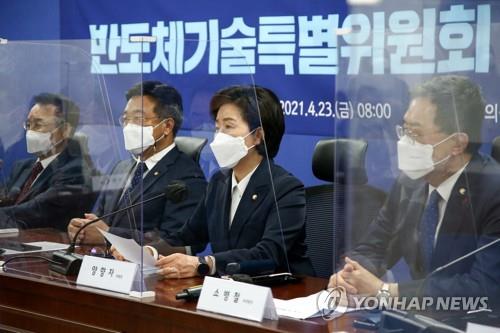