SEOUL, April 23 (Yonhap) -- The ruling Democratic Party (DP) is fighting an uphill battle to recalibrate real estate regulation policies, which have been blamed for its crushing defeat in recent local by-elections, as the government and the presidential office have expressed different opinions about whether to reduce property taxes.

Following the ruling party's losses in mayoral by-elections in Seoul and Busan on April 7, some DP lawmakers have proposed lowering real estate possession taxes to win back public support, but top government officials and the presidential office Cheong Wa Dae have reacted skeptically to such proposals and instead emphasized the importance of policy consistency. 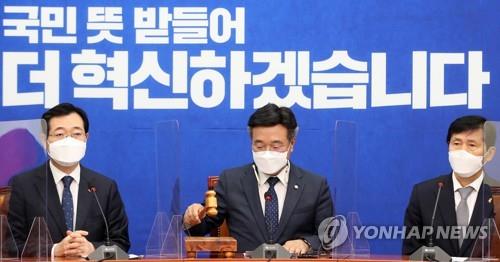 The government of President Moon Jae-in has raised real estate possession taxes and tightened regulations to stem property speculation. But Seoul's apartment prices have soared more than 50 percent during his presidency since 2017, according to civic groups, as some of the measures backfired.

Public disgruntlement over the spike in apartment prices and property possession taxes has been cited as a key factor in the falling approval ratings of Moon and the DP gearing up for next year's presidential election.

There have been growing calls within the DP for easing the tax burdens of single-house owners who have nothing to do with property speculation.

Another contentious issue is whether to readjust the comprehensive real estate holding tax, which has been imposed on expensive residential real estate by the central government, separately from property taxes levied by local governments.

Some DP lawmakers suggested that the threshold amount of the comprehensive property holding tax be raised from the current 900 million won (US$805,000) to 1.2 billion won to set more people free from the national tax burden. They also proposed that the ratio of people subject to the comprehensive real estate holding tax be reduced from the current 3.4 percent of the population to 1 to 2 percent.

The lawmakers are also calling for raising the upper limit of property tax reductions from the current 600 million won to 900 million won and easing the transfer tax burdens for multiple house owners.

But top officials of the Moon government are against any lowering of real estate possession taxes.

"Any attempt to easily change the policy principle can give a wrong message to the entire real estate market. The matter should be cautiously approached," said Kim Boo-kyum, the prime minister nominee, who opposes a revision of the current tax policies.

Acting Prime Minister and Finance Minister Hong Nam-ki has also negatively reacted to the proposals by some DP lawmakers, saying there is widespread misunderstanding about the comprehensive real estate holding tax, because only 3 to 4 percent of the population is subject to the tax.

Lee Cheol-hee, the new senior presidential secretary for political affairs, said the DP's 174 lawmakers have shared various opinions on ways to amend property policies but the party, Cheong Wa Dae and the government have yet to find common ground.

As Lee stated, many DP lawmakers are still opposed to lowering the comprehensive real estate holding tax, saying the tax issue may be irrelevant to the results of the April 7 by-elections.