SEOUL, April 23 (Yonhap) -- A Seoul court ordered the government on Friday to cancel an extended exit ban on GM Korea CEO Kaher Kazem, who is on trial for charges of illegal hiring.

Kazem sued the country's justice minister in July after the justice ministry extended an exit ban on him to facilitate an investigation into the illegal hiring charges.

The Seoul Administrative Court ruled in favor of the head of the American carmaker's Korean unit, clearing the way for his departure.

Kazem and four other company executives have been standing trial since prosecutors here indicted them in July on charges of illegally hiring over 1,700 workers from 24 outsourcing companies from September 2017 to December 2019.

The dispatched workers were allegedly made to work at the carmaker's main production lines in automotive body assembly and painting, where their hiring is banned under a local law protecting dispatched workers.

Even before Friday's ruling, Kazem was granted a stay for the extended exit ban last month, which enabled him to leave the country.

The productivity expert was appointed as the new chief of GM Korea in September 2017 amid a slump in sales and wage disputes between labor and management. 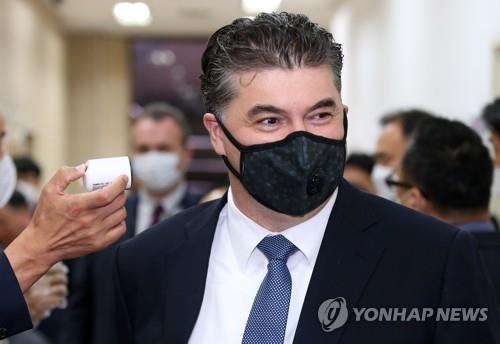