The Korean Council for Justice and Remembrance for the Issues of Military Sexual Slavery by Japan, which works for the victims, issued a statement strongly denouncing the court for rejecting the lawsuit launched by 20 plaintiffs, including surviving sex slavery victims referred to as comfort women. 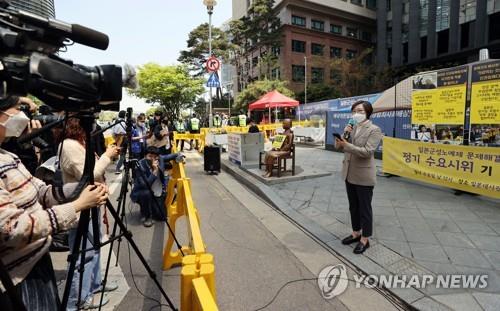 Presiding judge Min Seong-cheol of the Seoul Central District Court made the ruling on Wednesday, citing Japan's state immunity, though another judge of the same court ordered Japan in January to make financial reparations of 100 million won (US$91,300) each to the first group of 12 victims after rejecting Japan's claim to state immunity.

"We strongly condemn Min's anti-human rights, anti-peace and anti-historical ruling that will be remembered as a big stain in world human rights history as well as in Korean history," the Seoul-based group said.

"In order to restore the victims' human rights and honor, we will discuss with the victims and their families to proceed with an appeal," it said.

The council said the entire nation has been shocked and disappointed at the different court rulings and vowed to fight with victims until the day when the Japanese government acknowledges its responsibility for crimes against humanity and promises and implements legal compensation.