SEOUL, April 23 (Yonhap) -- The Belgian Embassy in Seoul received a deluge of angry public comments online on Friday for its ambassador's failure to sincerely apologize over a recent assault incident involving his wife.

On Thursday, the embassy released a statement on its Facebook page, in which it said Ambassador Peter Lescouhier sincerely regrets the incident and apologizes for his wife's action that was unacceptable regardless of the circumstances.

Police have been looking into allegations that Lescouhier's wife slapped a clothing store employee in the face and another employee in the back of her head early this month.

The employees reportedly asked the wife if she paid for the clothes she was wearing at the time because the shop was selling the same apparel.

Revealing that his wife has been hospitalized after suffering a stroke last week, the ambassador promised that she will comply with the police investigation into the incident.

More than 600 comments have been attached to that posting as of Friday afternoon, the bulk of which contended that the ambassador should have delivered his apology in person, instead of online.

Others pointed to the language in the apology, released in both Korean and English, saying that the Korean translation did not use honorifics and read as if it was done through an automated online translator.

Some comments even questioned if the embassy was telling the truth about the wife's health conditions.

"As a Belgian I'm disappointed! Don't hide in the hospital and apologize properly," read the comment in Korean. 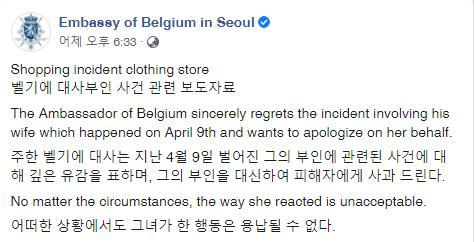