SEOUL, April 27 (Yonhap) -- South Korea's major business lobby groups on Tuesday said they have submitted a petition for the pardon of Lee Jae-yong, the imprisoned de facto leader of Samsung Group, to the presidential office for the sake of the national economy amid a global semiconductor shortage.

"Our semiconductor industry is facing new risks and a challenging situation, and if we see a delay in investment and business decisions because of a leader's absence who needs to oversee the company's management amid fierce competition of the chip industry, the country may lose the No. 1 status in a day," they said in a joint letter. 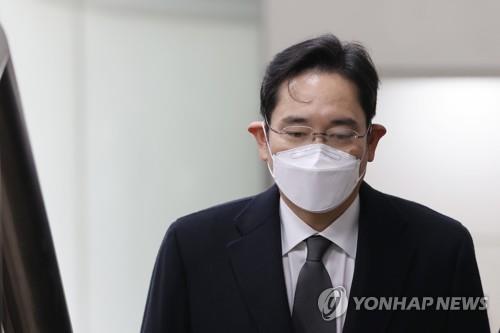 Given the prison time he already has served, Lee will be a free man in July 2022, unless he is granted a pardon or commutation.

Samsung Electronics is the world's largest memory chip producer and the No. 2 player in the foundry sector. It has been considering building a new chip facility in the United States.

Requests for Lee's pardon have been made by various sectors, from religious to political communities.

The Jogye Order, South Korea's largest Buddhist sect, earlier this month submitted a letter to the government to give Lee "another chance" for contributing to the country's economy. The Korea Senior Citizens Association also delivered a letter requesting a pardon for Lee.

Others have been posting petitions for Lee's pardon on the Cheong Wa Dae website.

The government has been discreet over Lee's pardon. Justice Minister Park Beom-kye recently said he has not reviewed any possibility of Lee's early release from jail.