Lee made the remarks during an event organized by civic groups to celebrate the anniversary of the Panmunjom Declaration adopted after the summit talks on April 27, 2018, stressing that South Korea is willing to resume talks with the North "anytime, anywhere and on any issues."

"We emphasize again that we are willing to talk with the North anytime, anywhere and on any issues regardless of the format," he added. "We hope that North Korea will come out for talks at an early date in respect for the spirit of the Panmunjom Declaration." 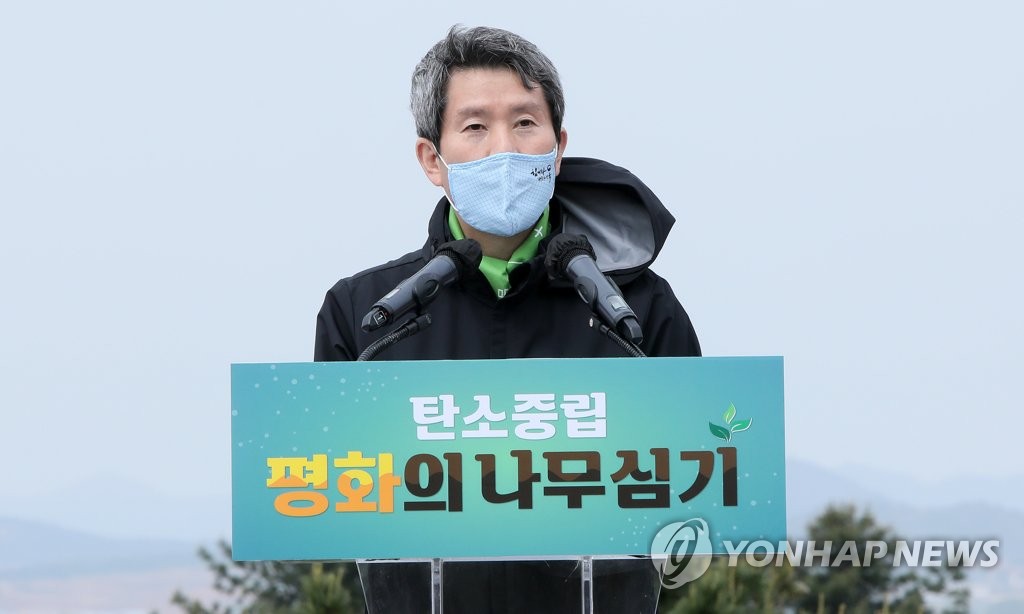 The minister praised the Panmunjom Declaration as an agreement that helped build a "framework" for a sustainable peace process by declaring there will be no war on the Korean Peninsula.

He, however, expressed regret that progress has not been made over the past three years as much as the people of the two Koreas hoped, saying that it is necessary to build a system to prevent the once-initiated peace process from going backward anymore.

Lee also vowed to push for parliamentary ratification of the Panmunjom Declaration.

"I am sure that the Panmunjom Declaration is not a thing of the past but a part of the still-breathing present on the Korean Peninsula and a landmark toward which the future of greater peace and prosperity should march," he added.

The April 27 summit held at the border village of Panmunjom led to a series of peace talks not only between the two Koreas but also between the North and the United States, including the unprecedented summit between Kim and U.S. President Donald Trump.

The peace process, however, has been stalled since the second summit between Kim and Trump in Hanoi ended without a denuclearization agreement in early 2019, which also brought inter-Korean exchanges and peace talks to a halt. Pyongyang has not responded to Seoul's repeated offers for talks and cross-border cooperation.

In an apparent reflection of the chilled inter-Korean relations, there were no government-organized celebrations in the South on Tuesday to mark the summit anniversary.

North Korea also remained mum about the summit anniversary as they did last year. This came in contrast with the first anniversary in 2019 when the North's state media carried various reports featuring the Panmunjom Declaration and called for its faithful implementation.