SEOUL, April 27 (Yonhap) -- One of South Korea's top financial officials has recently drawn the ire of investors in cryptocurrency when he lectured them, saying they were walking "on the wrong path" and needed to correct themselves.

Appearing in a meeting at the National Assembly on Thursday, Financial Services Commission (FSC) Chairman Eun Sung-soo said it was "the duty of elders" like himself "to correct the young people" who spend money in digital currencies that have no "intrinsic value."

He went on to warn of a possible massive shutdown of local cryptocurrency exchanges if they fail to register by Sept. 24, required by a law aimed at improving the transparency of the murky market.

There are only four cryptocurrency exchanges -- Bithumb, Upbit, Coinone and Korbit -- properly registered with the authorities at the moment and some 200 are not.

"I don't think we should protect the market just because there are many investors," he said. "Believing in the need to protect assets that rise by 20 percent a day could in turn encourage speculative behavior."

The response to Eun's comments, which largely represent the official stance of the South Korean financial authorities, was quick and critical. 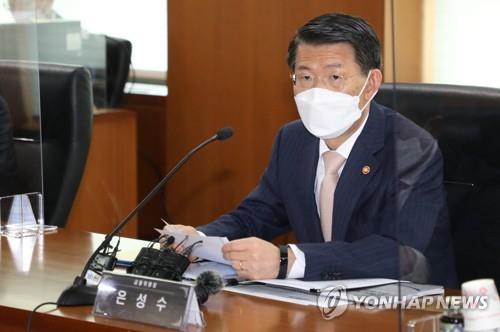 The next day, one petitioner, who called himself "an ordinary office worker" in his 30s, asked Eun to ruminate on "what drove the country's young people to this situation and who created the wrong path of today."

In the petition posted on Cheong Wa Dae's website, the person highlighted the despair felt by many young people about lack of jobs and opportunities despite "endless competition."

While many older people "easily accumulated wealth by riding the real estate bubbles" decades ago, they "are now churning out regulations" to strip such opportunities from young people "faced with a stark reality that however hard we try, we are unable to become rich enough to buy a house," the petition read.

The petitioner also said the government's planned taxation on cryptocurrency trading should come with the legalization of the virtual currency market and the protection of investors.

The petition had garnered nearly 138,000 signatures as of Tuesday morning. 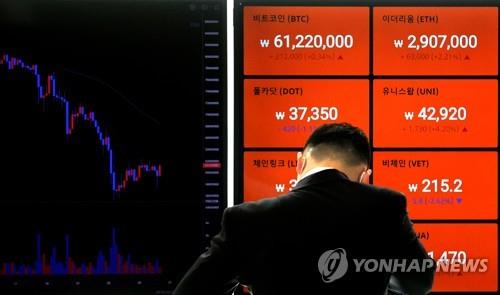 Starting next year, the government plans to levy a 20 percent income tax on cryptocurrency transactions, and cryptocurrency exchanges will be required to submit records of digital money trading to tax authorities. Still, regulators have been too slow to keep pace with the changes in virtual currency trading and the market remains largely unregulated.

According to FSC data released by Rep. Kwon Eun-hee of the minor opposition People Party, the number of newcomers to the four cryptocurrency exchanges in the first quarter stood at 2.49 million, 48.8 percent of the exchanges' total users. Among the newcomers, 1.58 million, or 63.5 percent, were people in their 20s and 30s.

Calling the government "utterly irresponsible," Rep. Kwon, floor leader of the party, slammed Eun over his "hands-off" attitude, saying he was only "looking for ways to evade responsibility."

The recent frenzy in the virtual money market was "driven by frustrated young people seeking to find an exit" from a hopeless, runaway housing market, she said, calling on the government to more actively respond to the "changing financial environment."

Joo Ho-young, floor leader of the major opposition People Power Party, also criticized the government for failing to even understand the exact size of the market and being "inconsistent" in its approach to the market.

The ruling Democratic Party (DP) has also taken the issue seriously, especially after its crushing defeat in the by-elections earlier this month, largely attributed to young people's loss of confidence in the Moon Jae-in government over deepening inequality, among other things.

The party said it will have a working-level committee review various pressing issues surrounding the market, including ways to protect investors, and expand discussions in the days to come.

"We should come up with measures to stem illicit activities, like money laundering or price manipulation, and to protect investors by improving the transparency and stability of the trading, rather than sending off warning messages like a possible closure of exchanges," Rep. Oh Young-hwan from the DP said Monday.

"The market cannot and should not, be stopped any more, and we should instead find a way to protect investors and nurture the industry," Rep. Noh Woong-rae said.