The 1971 film, a remake of Kim's previous project "The Housemaid" (1960), revolves around a young housemaid named Myeong-ja (Youn) who has a baby after being raped by the landlord (Namkoong Won). The wife of the landlord forces Myeong-ja to get an abortion, and the young housemaid becomes insane and hysteric.

It was Youn's silver screen debut and helped her rise to stardom in the Korean film industry. She won several best actress prizes from renowned film awards and festivals at home and abroad, ranging from South Korea's annual Blue Dragon Film Awards to the Sitges Film Festival, a Spanish movie fest specializing in fantasy and horror films.

She was also cast in Kim's next project, "Insect Woman" (1972), as a concubine of a professor.

For Youn, who was in her early 20s when she filmed "Woman of Fire," however, it was hard to act in the role of the hysteric character cruel enough to stomp a rat to death under the direction of Kim, who was known for his tough and demanding characteristics.

In 2008, she admitted that she had even decided not to take a lead role in a film after two projects with director Kim. Before returning to the big screen with the melodrama "A Good Lawyer's Wife" in 2003, she thrived on the small screen for about a decade.

After winning the best supporting actress award at this year's Academy Awards for the immigrant film "Minari," Youn paid tribute to the late director who discovered her. It is the 50th anniversary of her debut with "Woman of Fire."

"I'd like to dedicate this award to my first director, Kim Ki-young, who was a very genius director. I made my first movie with him," she said in an acceptance speech on Sunday. "He would be very happy if he is still alive."

Later in a press conference, she said that it took a long time to appreciate his instruction and directing as it was so painful when working with him.

"I thanked him when I turned 60, after he passed away. Before that, he was just an eccentric director who gave me a hard time," she said.

Director Kim, who died in 1998, has been mentioned as a role model by many Korean filmmakers these days, including Bong Joon-ho and Park Chan-wook.

In a retrospective of Youn's 50-year career highlights, "Woman of Fire" will be re-released in South Korean cinemas this Saturday. 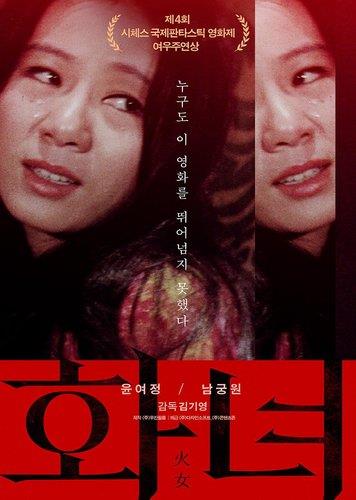