SEOUL, April 27 (Yonhap) -- The defense ministry said Tuesday it will bring electricity equipment and construction materials onto a U.S. missile defense base the following day.

The ministry will inform local residents of the plan in advance and take safety measures as previous shipments sparked violent protests from villagers, officials said.

The military authorities plan to move a mobile generator replacement and construction equipment and materials Wednesday onto the U.S. Forces Korea (USFK) base in the central town of Seongju, which hosts the Terminal High Altitude Area Defense (THAAD) system.

"The transport by land has nothing to do with the THAAD battery capabilities, and we will work as safely as possible in consideration of related circumstances," the ministry said in a statement.

Two electricity generators were installed in 2017 when the missile shield system was introduced. One of them will be replaced with a new one, the ministry said.

A ministry official stressed that no weapons or other items that aim at upgrading or strengthening the unit are included.

Local residents have long been opposed to the stationing of the battery in their village, citing environmental and other concerns. They have often clashed violently with police as they tried to block new equipment and other supplies from entering the base, forcing the U.S. military to use air transportation to move supplies.

"The ground transport is inevitable as those items are too heavy to be airlifted," the official said.

The U.S. base was established in 2017 amid strong opposition from China and North Korea. Seoul and Washington have stressed that the system aims to better cope with the growing missile threats posed by North Korea. 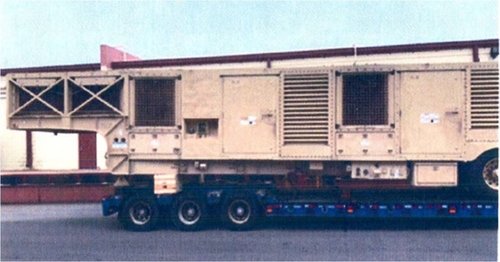