SEOUL, April 28 (Yonhap) -- The election of a new mayor in Seoul has given fresh momentum to stalled talks on choosing a new landfill for the city's garbage, but a breakthrough remains elusive, as no local government wants a dump in its backyard.

Incheon, a port city west of the capital, has received all of the garbage from Seoul and the surrounding Gyeonggi Province since 1992. In November, it declared again that it was ending that service in August 2025, when its designated landfill is expected to reach capacity, and building a new site only for its residents. 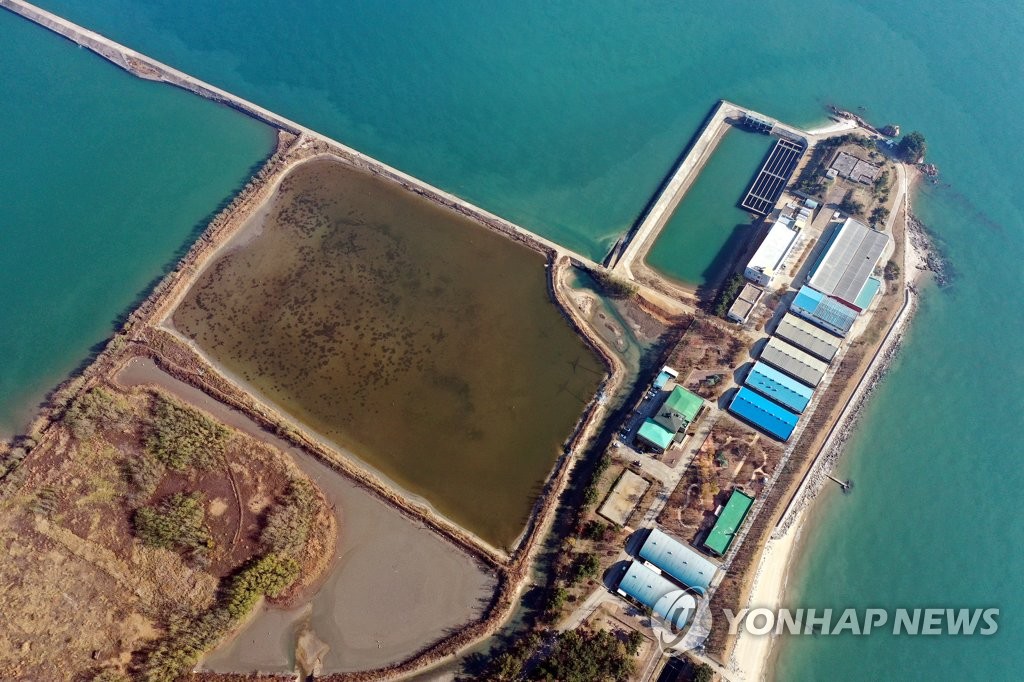 Seoul, which recently elected Oh Se-hoon as its mayor, has countered that according to a clause in a 2015 agreement involving the two cities, Gyeonggi Province and the Ministry of Environment, it can use up to 15 percent of Incheon's surplus landfills in the event it fails to find an alternative site.

Incheon has balked at the idea and demanded its neighbors stick to the central government's principle of each area handling its own garbage.

"Despite our country's garbage policy, for over 30 years Incheon and its people have suffered because of a lack of adherence to this obvious principle," Incheon Mayor Park Nam-chun wrote on his Facebook page on March 31, a week before Oh's election.

"I am not oblivious to the fact that candidate Oh Se-hoon actively participated in this," he continued, apparently referring to Oh having previously served as mayor of Seoul from 2006-2011.

"Incheon is no longer the sacrificial lamb for Seoul and the capital area," Park added.

Seoul accounts for the largest portion of the designated landfill at 42 percent, followed by Gyeonggi at 37 percent and Incheon at 21 percent, according to Kyeonggi Ilbo, a newspaper based in the province that uses a different English spelling for Gyeonggi.

But Oh has made his position clear: Seoul has no land of its own to use for its garbage disposal and negotiations with Incheon to extend the use of the current landfill are the only way forward.

The environment ministry, Seoul and Gyeonggi offered 250 billion won (US$225 million) in special subsidies to any local government that would provide the next disposal site, but they received no bids over a three-month period that ended April 14. 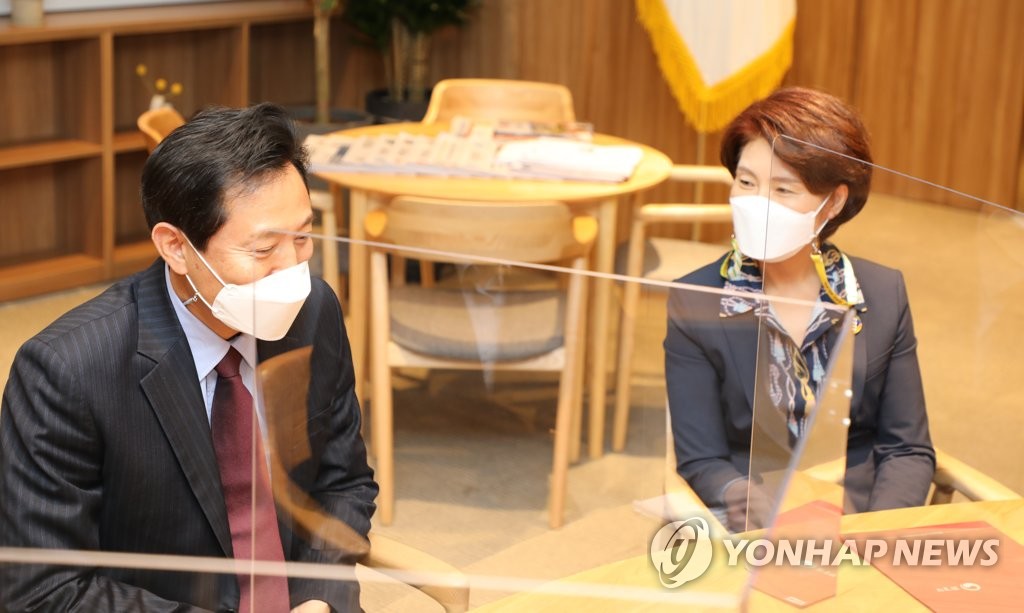 Oh, who is affiliated with the main opposition People Power Party, is unlikely to find an ally in Park or Gyeonggi Province Governor Lee Jae-myung, both of whom are members of the ruling Democratic Party.

He took the matter directly to President Moon Jae-in during a luncheon at Cheong Wa Dae last week, asking that the president "mediate for the stable operation of the capital area's landfill."

His remarks were widely interpreted as a request for an extension of the operation of the current Incheon site.

"Experts say the landfill we are currently using can be used until 2027, unlike earlier expectations," Oh told reporters after the luncheon, referring to analysis that due to shrinking garbage volumes overall, the landfill will not reach capacity in 2025 as previously forecast.

"We need to come to a broad consensus on the use of the surplus sites before the end of this year," he added, alluding to the 2015 agreement. "The (three) chiefs of local governments will soon have an opportunity to discuss the matter, together with the environment ministry, and I asked Cheong Wa Dae for its cooperation and assistance."

Park, the Incheon mayor, slammed Oh for his remarks.

"You should listen to the voice of the party involved, which is Incheon," he wrote on his social media. "Let's meet."

No meetings have yet materialized between Oh, Park and Lee, the three local government chiefs. 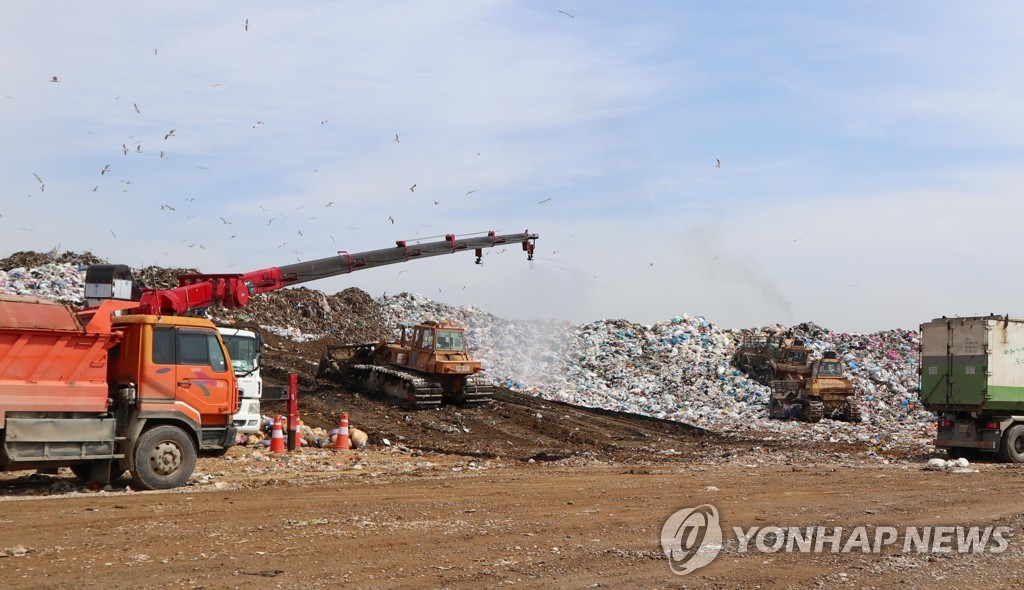 Regardless of how the immediate situation is resolved, observers say the government needs to come up with a sustainable and ecofriendly solution to the garbage crisis.

In September, the environment ministry unveiled a plan to comprehensively address the issue of waste disposal, starting with reducing waste in the production and distribution stages.

Environmental groups welcomed the move, but insisted that more needs to be done to increase the use of recyclable materials and introduce technologies to convert heat to energy in the garbage burning process.

"By making it mandatory to use a set amount of recyclable materials, businesses should be forced to think about whether their products are recyclable," an official of Green Korea, an environmental activists group, said.

On the slow introduction of heat conversion technology, an official with the non-profit Climate Change Center alleged there is a common misperception in South Korea that burning garbage releases environmental pollutants, such as dioxins.

"In fact, our incineration facilities are required to have tools to prevent air pollution, with some new facilities being above the standard set by law," the official said. "If we can win the public's support based on confidence in our anti-air pollution technologies, we'll be able to increase the level of recycled energy."