SEOUL, April 29 (Yonhap) -- Unification Minister Lee In-young on Thursday said that South Korea will strive to bring the stalled peace process on the Korean Peninsula back on track, saying that the first half of this year will be the "most optimal" time to realize any possible progress.

Lee urged the United States to engage North Korea at the earliest date possible during a press conference in Seoul as the Joe Biden administration is likely to finalize its monthslong North Korea policy review in the weeks to come.

"The government will make efforts to persuade the U.S. to engage the North at an early date and bring the Korean Peninsula process back on track and make practical progress," Lee told reporters during the press conference held at the ministry's inter-Korean dialogue office.

"With the U.S.'s North Korea policy review expected to be finalized and uncertainty being lifted, I believe that the first half will be a golden opportunity and the most optimal time for the South, the North and the U.S. to move together toward the Korean Peninsula peace progress," he added.

Lee stressed the importance of the upcoming summit talks between President Moon Jae-in and U.S. President Joe Biden slated for next month, expressing hope that the summit could serve as a chance to further strengthen coordination on North Korea and be conductive to jump-starting the peace initiative on the peninsula.

"I hope that the U.S., from a perspective of allies, will respect the direction and achievements of the Korean peace process as it is reviewing and drawing up its North Korea policy review," he said. 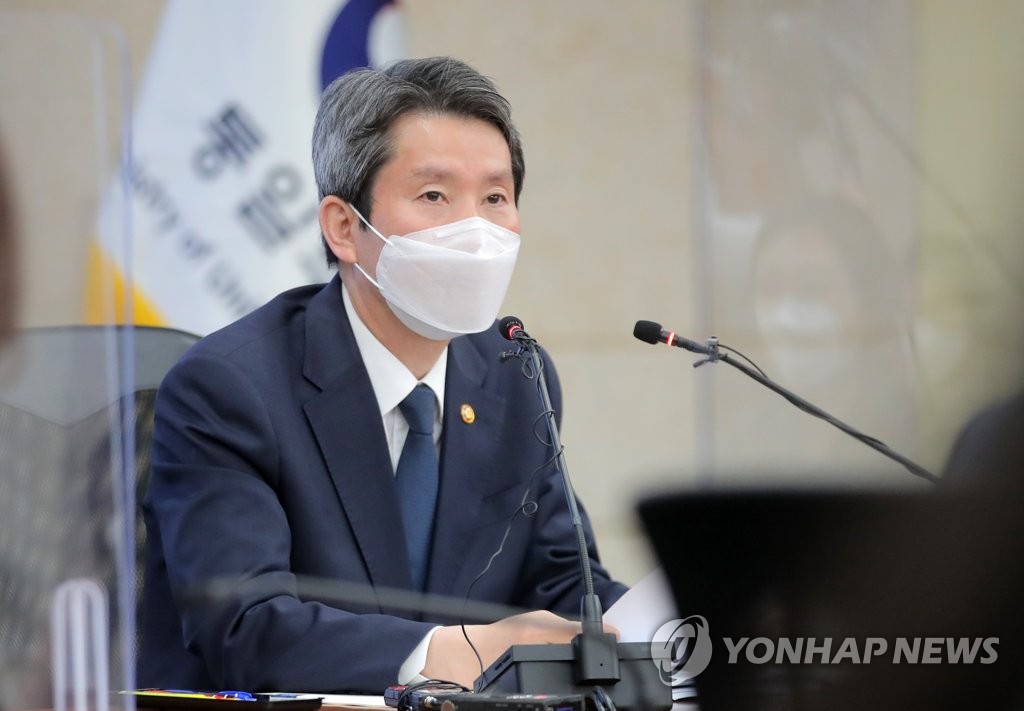 Lee struck a somewhat optimistic note about dialogue prospects, saying that Pyongyang has used harsh words criticizing South Korea and the U.S. but without major provocations, which he thinks might be signaling that it is "exploring the possibility of dialogue" through such calibrated actions.

"North Korea will likely weigh its next external actions while paying attention to the U.S. policy on the North and particularly to the outcomes of next month's summit between South Korea and the U.S., along with the coronavirus situations," he said.

Lee repeated his calls for North Korea to return to inter-Korean dialogue, saying that South Korea is ready to sit down with North Korea "anytime, anywhere and on anything."

"Inter-Korean dialogue can take place even right now only if North Korea has a willingness," he said.

Cross-border relations remain stalled since the second summit between North Korean leader Kim Jong-un and U.S. President Donald Trump in Hanoi ended without a denuclearization agreement in early 2019, which also brought inter-Korean exchanges and peace talks to a halt.

In an apparent reflection of the chilled inter-Korean relations, there were no government-organized celebrations in the South on Tuesday to mark the third anniversary of a 2018 summit between Moon and Kim. The North's media also did not report on the summit.

Despite the chilled ties, the minister praised the Panmunjom Declaration signed by the leaders of the two Koreas after their summit as a historic event that provides a "landmark" for the direction of the peace process and noted that now is the time to find a way to prevent any progress achieved from the agreement from being rolled back.

"One of the efforts could be to get the Panmunjom Declaration ratified by the National Assembly," he said. "The unification ministry has almost completed its necessary internal preparations."

He also vowed to continue the efforts to provide humanitarian assistance to North Korea, saying that cooperation in such areas between the two Koreas could help create an atmosphere conducive to building peace and resuming denuclearization talks.

Meanwhile, Lee said that he received his first AstraZeneca coronavirus vaccine shot last week, though he declined to elaborate more.

A high-ranking ministry official explained later that Lee received the shot to prepare himself for a possible trip to the U.S. since it takes about two months before the second shot of the vaccination process can be administered.

Lee earlier sought to visit the U.S. to discuss North Korea policy coordination after the Biden administration took office in January, though preparations were suspended due to concerns over the global pandemic.

The official said that Lee's trip to the U.S. has not been decided, but it could come in a timely manner after next month's summit between Moon and Biden.