(ATTN: UPDATES with comments of athletes and other details in paras 6-12)

According to the Korean Sport and Olympic Committee (KSOC), the first group of 100 Olympic athletes and coaches got Pfizer's vaccines at the National Medical Center in central Seoul, beginning at 4 p.m. 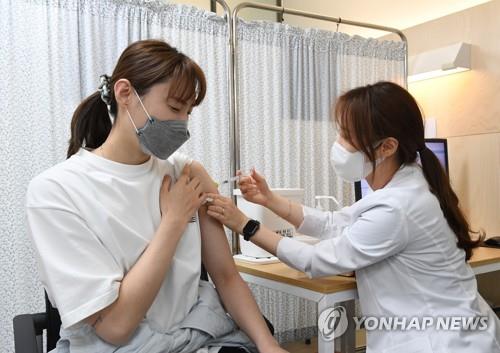 The KSOC said a total of 931 Olympic and Paralympic athletes, coaches and support personnel will be inoculated in four groups by May 4, adding the other vaccination days are Friday and May 3.

It said 598 of the total -- national athletes and coaches and support personnel under the age of 30 -- will all be given Pfizer vaccines to maintain their performance and in consideration of the vaccination cycle and the tight Olympic schedule.

The remaining support personnel, including KSOC staff, will receive AstraZeneca vaccines during May.

None of the 100 athletes and coaches complained of symptoms of side effects after finishing their vaccinations.

Doctors asked the first group of athletes vaccinated to refrain from excessive training for two to three days.

South Korean volleyball star Kim Yeon-kyoung said she was worried because of a lot of words on the safety of vaccines and that doctors tried to relieve her anxiety.

"I was worried a lot, but I felt like I got a flu shot," Kim told reporters after her inoculation, expressing hope to depart for Italy after receiving her second vaccine shot soon. The South Korean women's national volleyball team is scheduled to leave for Italy on May 21 to compete in an international competition.

KSOC officials said the second Pfizer vaccine for the Olympic athletes and coaches will be administered three weeks after the first shot.

"Now that I've gotten my vaccine shot, I can realize that the Olympics are just around the corner," Lee said. 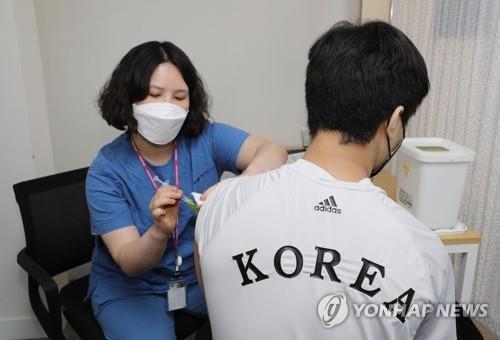 The Tokyo Olympics are scheduled to kick off on July 23 and continue through Aug. 8 after being postponed by one year due to the pandemic.

COVID-19 vaccination is not mandatory for athletes to compete in the games, but it is recommended if vaccines are available in their home countries. 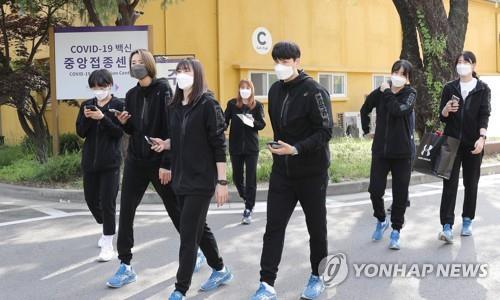