SEOUL, April 30 (Yonhap) -- The South Korean market of functional foods is growing fast amid greater awareness of health amid the coronavirus pandemic, a report showed Friday.

Sales of red ginseng and other health functional foods came to 4.9 trillion won (US$4.42 billion) in 2020, up 40 percent from four years earlier, according to the report by MezzoMedia, a local digital marketing solution company.

Red ginseng was the top-selling product with sales of 1.43 trillion won, followed by probiotics with 885.6 billion won and vitamins with 684.8 billion won.

In particular, the market of probiotics expanded 1.6 times over the past three years as a growing number of consumers became conscious of intestinal health.

The report also cited a survey of 515 South Korean users of functional foods aged 19-49, which showed 42 percent saying they are taking in more health foods following the COVID-19 pandemic.

The top choice for those users was vitamins with 73 percent, followed by products known to boost intestinal health and improve blood vessels.

South Korea has been gripped by the coronavirus pandemic since late January last year, with the country's infections and the death toll reaching some 121,000 and 1,825, respectively. 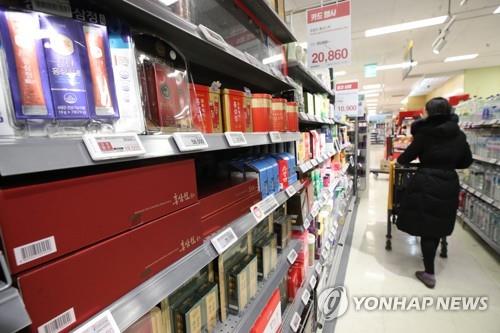