Moon is scheduled to visit the U.S. capital for the one-on-one summit to be held at the White House at Biden's invitation, according to Chung Man-ho, senior Cheong Wa Dae secretary for public communication.

He said the leaders' decision to hold an in-person summit despite the "difficult" situations attributable to the COVID-19 pandemic demonstrates the importance of the Seoul-Washington alliance.

Through the upcoming talks, the two sides are expected to reaffirm the strength of the alliance and further develop "comprehensive and reciprocal cooperation" and friendship between their leaders and people, Chung added in a statement.

In addition, Moon and Biden plan to have in-depth discussions on close coordination for the complete denuclearization of the Korean Peninsula and establishment of permanent peace, Chung said. Also among agenda items are "substantial" ties in the economy and trade and a joint response to such global challenges as climate change and the coronavirus. 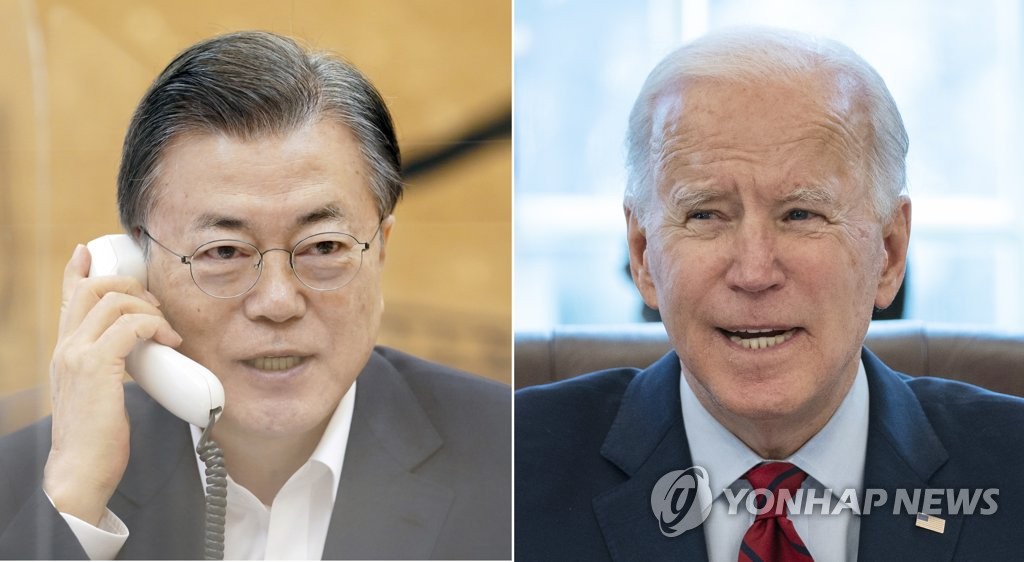 Seoul and Washington are still in consultations on the detailed itinerary of Moon's trip, a Cheong Wa Dae official told reporters on background.

He denied a news report that it has already been decided to include the sensitive issue of whether South Korea will join a regional security forum, called the Quad, in the list of agenda items. The U.S. is reportedly seeking to expand the Quadrilateral Security Dialogue, which currently has three other member states -- Japan, India and Australia.

Seoul maintains the position that it can take part in such a regional security consultation format as long as it complies with the principles of "transparency, openness and inclusiveness" and it abides by international norms, he stressed on the customary condition of anonymity.

With regard to speculation on the possibility of Moon requesting Washington's support for Seoul's campaign to acquire additional coronavirus vaccines, the official said the two sides have yet to fine-tune the agenda items related to the pandemic.

White House spokesperson Jen Psaki earlier made a related announcement, saying the planned summit will highlight the "ironclad" alliance between the two countries.

"President Biden looks forward to welcoming Republic of Korea President Moon Jae-in to the White House on May 21," Psaki said in a statement. "President Moon's visit will highlight the ironclad alliance between the United States and the Republic of Korea, and the broad and deep ties between our governments, people and economies."

The countries earlier said the summit will be held in the second half of next month.

It will mark Biden's second in-person summit with a foreign leader since he took office on Jan. 20.

"President Biden looks forward to working with President Moon to further strengthen our alliance and expand our close cooperation," the statement said.

The U.S. has said the Moon-Biden summit will mark a milestone in Biden's diplomatic and national security achievements in his first 100 days in office.

Moon's visit to Washington will also come as the U.S. is conducting a review of its policy on North Korea.

In his first address to a joint session of Congress, Biden said he will work with allies to address "serious" nuclear threats from North Korea and Iran through "diplomacy" and "stern deterrence."