SEOUL, April 30 (Yonhap) -- Three soldiers and an airman tested positive for the new coronavirus, the defense ministry said Friday, the latest in a series of infections at barracks across the nation.

The four service members, all from different units, were confirmed to have been infected following their recent vacation, bringing the total number of infections among the military population to 784, according to the ministry.

Earlier this week, the military began vaccinating troops age 30 and older, and the campaign is under way without a hitch, the ministry said.

"By next week, we are planning to administer AstraZeneca vaccine shots to around 105,000 service members who volunteered for the campaign," a ministry official said.

"Swift vaccination is needed, but ensuring safety should come first," Suh said, instructing officials to give soldiers enough time to rest after receiving a shot and thoroughly adhere to antivirus schemes. 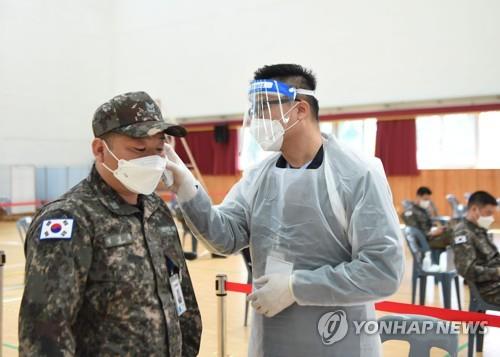