SEOUL, May 2 (Yonhap) -- North Korea said Sunday that U.S. President Joe Biden made a "big blunder" after he called Pyongyang's nuclear program a serious threat, warning the U.S. will face a "worse and worse crisis beyond control."

Kwon Jong-gun, director general of the Department of U.S. Affairs of the Foreign Ministry, made the remarks after Biden pledged in his first congressional address last week to work with allies to address "serious threats" from the North and Iran through diplomacy and stern deterrence.

"It is certain that the U.S. chief executive made a big blunder in the light of the present-day viewpoint," Kwon said. "Now that what the keynote of the U.S. new DPRK policy has become clear, we will be compelled to press for corresponding measures, and with time the U.S. will find itself in a very grave situation."

The official also said that the U.S. "will face worse and worse crisis beyond control in the near future if it is set to approach the DPRK-U.S. ties, still holding on the outdated policy from Cold War-minded perspective and viewpoint."

"Diplomacy" and "stern deterrence," which Biden pledged to used to address threats from the North, are "a spurious signboard for covering up its hostile acts" and "a means for posing nuclear threats" to the North, respectively, the official said.

In a separate statement, the North's foreign ministry also slammed the U.S. for criticizing its human rights record, saying it amounts to insulting the "dignity of our supreme leadership."

The foreign ministry issued the statement after U.S. State Department Spokesman Ned Price released a statement last week on the occasion of North Korea Freedom Week, calling the North "one of the most repressive and totalitarian states in the world."

Price also argued the North was tightening its border control under the pretext of fending off the COVID-19 pandemic, but in reality to prevent more people from defecting the country.

In Sunday's statement, Pyongyang accused the U.S. of smearing its nationwide anti-epidemic measures as "human rights abuses" and insulting the dignity of the "supreme leadership in its grave politically-motivated provocation."

"This becomes an evident sign that it is girding itself up for an all-out showdown with the DPRK, and this is also a clear answer to how we should approach the new administration in the U.S.," it said.

It then stressed that human rights for the North "precisely mean state sovereignty."

"The DPRK Foreign Ministry vehemently denounces the provocation from the U.S. as a vivid manifestation of the hostile policy toward the DPRK to tarnish its image and as a crude violation of its state sovereignty," it said.

The North warned that the U.S. will "surely and certainly regret for acting lightly, defying our warnings." 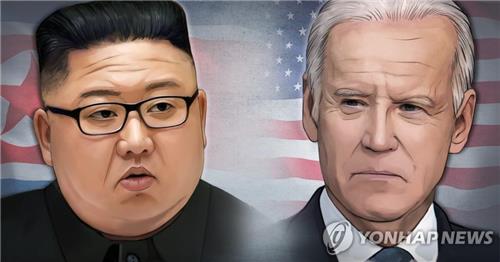