SEOUL, May 2 (Yonhap) -- South Korea may soon face a shortage of COVID-19 vaccines as less than 10 percent of the country's AstraZeneca vaccine doses are left, the health authority said Sunday, raising concerns over delays in the nation's immunization schedule.

The nation has secured 2 million AstraZeneca vaccine doses so far, and 1.82 million have received their first jab of the two-shot regimen as of Sunday, the COVID-19 vaccination management task force said.

There are only 166,716 shots left, or 8.8 percent of the total. They could be administered to about 200,000 people if low dead space (LDS) syringes, which are designed to maximize the number of recipients, are used.

Considering over 100,000 people have been inoculated a day over the past few weeks, the leftover doses are expected to run out in less than two days unless additional bottles are delivered within several days.

The health authority earlier said it will secure 8.67 million additional doses from AstraZeneca and via the World Health Organization's global vaccine COVAX Facility project by June, but it has not yet unveiled a detailed schedule.

The vaccination coordination team last month recommended people receive the second jab of AstraZeneca's vaccine within 11-12 weeks of the first one, shorter than the 8-12 weeks it previously advised, to raise its efficacy and in consideration of the vaccine supply.

As health officials began administering AstraZeneca's vaccine on Feb. 26, those who have received the first shot will be required to receive the second jab beginning May 14, which could complicate the vaccination schedule. 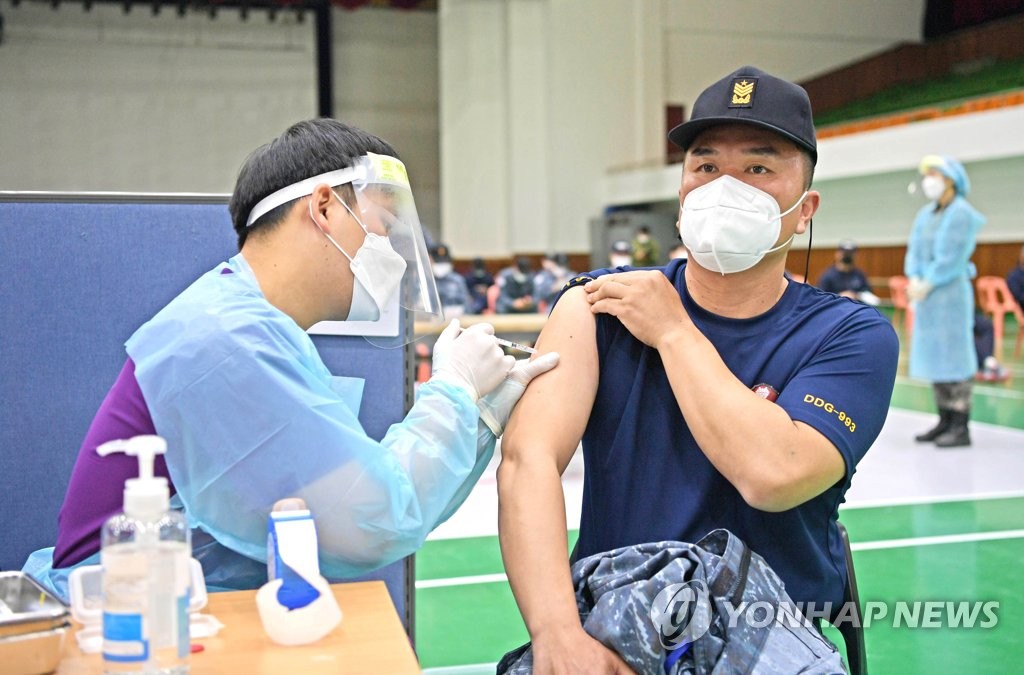 AstraZeneca vaccine doses have been administered to nursing home residents and employees below age 65 and health workers in general hospitals in the first phase of the inoculation, and pharmacists, patients with chronic kidney diseases, police, firefighters and soldiers are now eligible for the vaccine. Those below age 30 are excluded from the list on concerns over rare blood clots.

Pfizer's doses have been first given to front-line health workers in hospitals designated for COVID-19 treatment, and those age 75 and over began to receive shots from last month. Pfizer recommends a three-week interval between the two doses.

The health authority said Friday that it requested vaccination centers to refrain from receiving more reservations for Pfizer's first shot from the elderly group, citing "a temporary supply imbalance."

The slower-than-expected vaccine shipments raise concerns over the feasibility of the country's plan to vaccinate 12 million people by the end of June in a bid to achieve herd immunity by November.

A total of 3.35 million people have received at least their first vaccine shots since the country started its vaccination program on Feb. 26, accounting for 6.6 percent of the total population, according to the Korea Disease Control and Prevention Agency (KDCA).

AstraZeneca's vaccine has been given to 1.82 million people, while 1.56 million have received that of Pfizer, the KDCA said.