Song earned 35.6 percent of the ballots cast before and during the party's congress held at its headquarters in Seoul earlier in the day, defeating Reps. Hong Young-pyo and Woo Won-shik, both in their fourth terms.

The election of Song comes as the DP, which commands 174 of the 300 parliamentary seats, is facing an urgent need to regain public confidence following its crushing defeat in the Seoul and Busan mayoral by-elections last month.

The new chairman will steer the party through to the presidential election in March 2022 against the odds of falling approval ratings for President Moon Jae-in, who is affiliated with the DP. 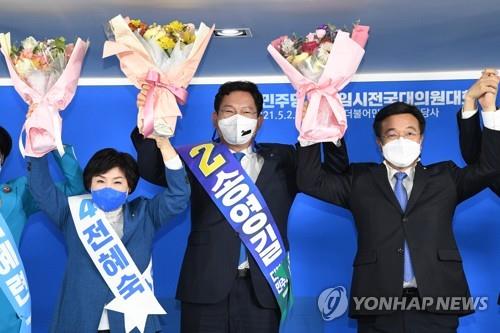 "I am confident that now is the time we ceaselessly move forward to make changes to secure victory," the 58-year-old said in his acceptance speech, pledging reform efforts to win the presidential election.

"I will safeguard the lives of the people and win the hearts and the minds of the people by attaining an efficient reform and consistency between the speech and the actions (of the party)," Song added.

He also put forward five key policy assignments for his term -- addressing the housing market, global climate change and the global race for the supply of semiconductors, as well as securing COVID-19 vaccines and peace and prosperity on the Korean Peninsula.

In a video message to the party congress, Moon stressed the importance of close coordination between Cheong Wa Dae and the ruling party in propping up the livelihoods of the people and reforming the party.

"The people are now questioning whether our party has indeed relentlessly innovated to live up to the changes of the time and the expectations of the public," Moon noted.

"If the new leadership is elected, we will become 'one team' again and spearhead the strong recovery and the great leap of South Korea," the president said.

Also elected during the congress were the new five members of the party's top council -- Reps. Kang Byung-won, Kim Yong-min, Jun Hye-sook, Back Hye-ryun and Kim Young-bae -- who, together with Song, will form the DP's new leadership.

The preceding DP leadership, including ex-floor leader Rep. Kim Tae-nyeon who was acting as the party chairman, resigned en masse over the landslide defeats in the April 7 by-elections.

The election rout shattered the ruling bloc's streak of four consecutive electoral triumphs, spanning from the two general elections in 2016 and 2020 and the local elections in 2018 to the presidential poll in 2017.

The latest defeat was widely seen as reflecting the public's outrage against the ruling forces' failure to rein in the runaway housing market as well as the railroading of a series of progressive bills through the National Assembly, including bills on reforming the state prosecution service.