WASHINGTON, May 2 (Yonhap) -- The U.S. policy toward North Korea is not aimed at hostility but reducing tension, the top U.S. security adviser said Sunday, adding the ultimate goal of the policy is to completely denuclearize the Korean Peninsula.

"Our policy towards North Korea is not aimed at hostility. It's aimed at solutions. It's aimed at ultimately achieving the complete denuclearization of the Korean Peninsula," Sullivan said in an interview with ABC News.

"And we're prepared to engage in diplomacy towards that ultimate objective but work on practical measures that can help us make progress along the way towards that goal," he added. 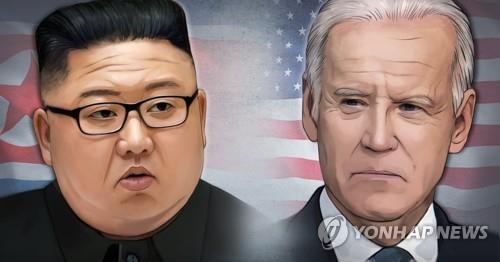 The remarks come shortly after North Korea accused U.S. President Joe Biden of making a "big blunder" and threatened the U.S. will find itself in a very difficult situation.

Pyongyang took issue with Biden's recent address to U.S. Congress, in which the U.S. leader said his country will closely work with U.S. allies to address the North Korean nuclear issue through "diplomacy, as well as deterrence."

"It is certain that the U.S. chief executive made a big blunder in the light of the present-day viewpoint. Now that what the keynote of the U.S. new DPRK policy has become clear, we will be compelled to press for corresponding measures, and with time the U.S. will find itself in a very grave situation," a North Korean diplomat said in a statement carried by the North's official Korean Central News Agency on Sunday (Korea Standard Time).

"We believe that rather than all-for-all or nothing-for-nothing, a more calibrated, practical, measured-approach stands the best chance of actually moving the ball down the field towards reducing the challenge posed by North Korea's nuclear program," he said.

On Friday, White House spokeswoman Jen Psaki said the U.S. has completed its extensive review of its North Korea policy.

"Our policy will not focus on achieving a grand bargain, nor will it rely on strategic patience," she said, referring to North Korea policies of previous U.S. administrations.

"Our policy calls for a calibrated, practical approach that is open to and will explore diplomacy with the DPRK," added Psaki, referring to North Korea by the acronym for its official name, the Democratic People's Republic of Korea.

U.S. policy not aimed at hostility, but reducing tension with N. Korea: Sullivan

U.S. policy not aimed at hostility, but reducing tension with N. Korea: Sullivan