SEOUL, May 3 (Yonhap) -- The defense ministry on Monday extended the current social distancing rules for the military for three weeks, which allow service members to take vacation in a limited manner.

The Level 2 scheme, which was supposed to expire Sunday, will be in place until May 23 in line with the government's COVID-19 guidance, according to the ministry. It is the third-highest level in the five-tier alert system.

Under the scheme, troops are allowed to go on vacation while strictly adhering to antivirus measures, such as a mandatory quarantine and coronavirus tests. Up to 20 percent of members of each base can go on leave at the same time.

But the stricter Level 2.5 social distancing has been in place in major Navy units since April 23 when 33 sailors who serve on the same naval ship tested positive. It was the first mass infection on a military vessel.

The Level 2.5 scheme, which bans troops' vacations and other off-installation trips, will continue through Friday, according to the Navy.

"We also designated this week as a special quarantine period at the barracks, which calls for canceling business trips, minimizing face-to-face meetings and expanding a flexible work system," a ministry official said.

Monday's decision came after the government extended the current Level 2 social distancing rules in the greater Seoul area and Level 1.5 for the rest of the country for another three weeks amid concerns of another wave of the pandemic.

The military also reported two more virus cases among its members in the day -- an Army officer in the border town of Cheorwon and an airman in the eastern city of Wonju, bringing the total cases at the barracks to 791, according to the defense ministry. 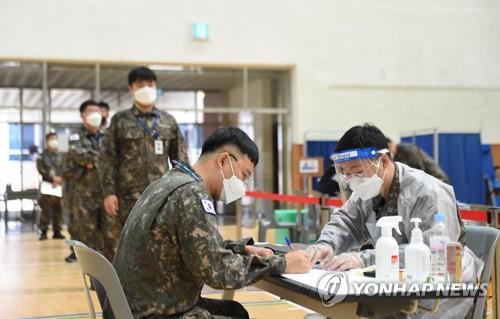