SEOUL, May 3 (Yonhap) -- A South Korean woman forced into sexual slavery for Japanese troops during World War II has died, a civic group said Monday, bringing down the number of registered surviving victims to 14.

The woman, identified only with her surname Yoon, died at around 1 p.m. Sunday at the age of 92 in Seoul, according to the Korean Council for Justice and Remembrance for the Issues of Military Sexual Slavery by Japan.

Born in North Chungcheong Province in 1929, she was dragged away to Japan in 1941 at age 13, while protesting against Japanese soldiers who were assaulting her grandfather.

She was forced to work at a textile factory in Shimonoseki, the westernmost city of Japan's Honshu island, for around three years before being taken to a military brothel in Hiroshima.

She returned to Korea after Japanese imperial rule over the Korean peninsula ended in 1945. She registered with the South Korean government as a victim of forced sexual enslavement in 1993.

Since then, she had devoted her life to the cause of comfort women, euphemistically referring to the victims. She testified to their sufferings and Japan's wartime crimes against humanity in and out of the country and participated in the weekly protest in front of the Japanese Embassy in Seoul.

The civic group said her funeral will be held privately at the wish of her bereaved family.

"It is heartbreaking that we lost yet another comfort woman victim," Minister of Gender Equality and Family Chung Young-ai said in a statement. "I hope she rests in peace."

"Now we have only 14 survivors registered with the government," she said, adding the the minsitry will "strengthen measures to help them live comfortably for the rest of their lives and continue seeking to restore the honor and dignity of the victims."

In February, Jeong Bok-soo, the oldest living South Korean comfort woman, died at the age of 98. 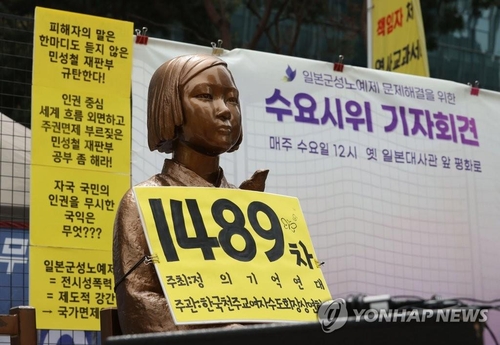 (LEAD) Surviving victims of sexual slavery by Japan reduced to 14

(LEAD) Surviving victims of sexual slavery by Japan reduced to 14