(ATTN: UPDATES with causes of mass infections and other details in paras 7-8, 10-13)

The municipality of Gangneung, 240 kilometers east of Seoul, has so far conducted the preemptive testing on 743 migrant workers and 43 of them were diagnosed with the new coronavirus, the officials said.

By nationality, Russians accounted for 36 of the confirmed cases, with the others from Central Asian nations, they noted.

The preemptive testing was administered after one foreign worker tested positive for COVID-19 last Saturday and at least six people tied to the worker were found to be infected with the virus two days later. 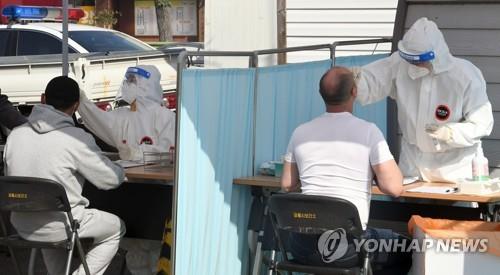 The Gangneung city government then set up a temporary testing station for foreigners on the parking lot of a former inter-city bus terminal and conducted tests on the more than 740 migrant workers in the city, including those exposed to the foreigner who tested positive Saturday.

It is now conducting epidemiological research into the infected migrant workers, as some of them were found to have lived together.

The city government estimates that there are now about 2,000 foreign migrant workers in Gangneung, a quiet coastal city with a population of slightly over 200,000, due mainly to the spring farming season.

Most of the migrant workers are reportedly working at the construction site of a thermal power plant as employees of subcontractor companies and at highland cabbage fields around Gangneung.

In Pyeongchang, adjacent to Gangneung, nine migrant workers from Vietnam have been confirmed to be infected with the coronavirus after harvesting cabbage with a South Korean man who tested positive last Friday.

Municipal officials also point to the workers' religious fasting period as one of the possible causes for the rapid spread of COVID-19 in the city. They speculate that the migrant workers fasted in the daytime before gathering at their accommodations after 7 p.m. to eat together.

A large number of the migrant workers are said to live in groups of two to three at motels or inns around the former bus terminal, leaving themselves vulnerable to mass infections.

Tuesday's tally of 43 infections marked a daily record for Gangneung since the outbreak of COVID-19 last year.

An additional 1,000 migrant workers, including about 400 undocumented foreigners, are expected to take coronavirus tests in the city on the day, officials said.

Alarmed by the mass infections of foreigners, Gangneung plans to raise the city's social distancing rules by one notch to Level 2, the third highest in the country's five-tier COVID-19 alert system.

The South Korean government has allowed all foreigners staying illegally in South Korea to take coronavirus tests free of charge without disclosing their identities, while conducting intensive coronavirus field inspections at foreigner-dense areas and workplaces.

Those measures were taken in response to growing cluster infections in vulnerable workplaces employing foreigners. In one recent case, a coronavirus cluster tied to a plastic manufacturing plant in Namyangju, just east of Seoul, infected more than 120 foreign workers, who lived together in the plant's dormitory, in March.