SEOUL, May 4 (Yonhap) -- Another batch of Pfizer Inc.'s COVID-19 vaccines for around 218,000 members of the general public aged 75 and over, and other virus-vulnerable groups will arrive in South Korea later this week, health authorities said Tuesday.

The products are part of a direct contract for 3.3 million people between the U.S. pharmaceutical firm and the Seoul government, the Korea Disease Control and Prevention Agency (KDCA) said.

So far, Pfizer vaccines, under the direct contract, for 1 million people have already been shipped in, with another shipment of the products for 875,000 people slated for later this month and 1.62 million people in June, it said. 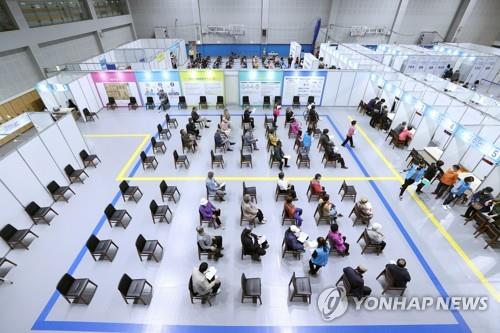 Vaccines provided by Pfizer are given at state-run vaccination facilities, as the products require ultra-cold chain storage.

On Monday, the authorities said they will ramp up the vaccination campaign by importing more vaccines before June amid concerns over a tight supply, which caused the nationwide rollout to lag.

The KDCA said the country will receive 14.2 million doses of vaccines in May and June, enough to vaccinate up to 13 million people by end-June.

The country has inoculated some 3.46 million people since its vaccine rollout in late February. A total of 4.12 million doses of vaccines had been shipped in as of Monday.

Pfizer vaccines for 218,000 people to arrive in S. Korea on Wednesday

Pfizer vaccines for 218,000 people to arrive in S. Korea on Wednesday